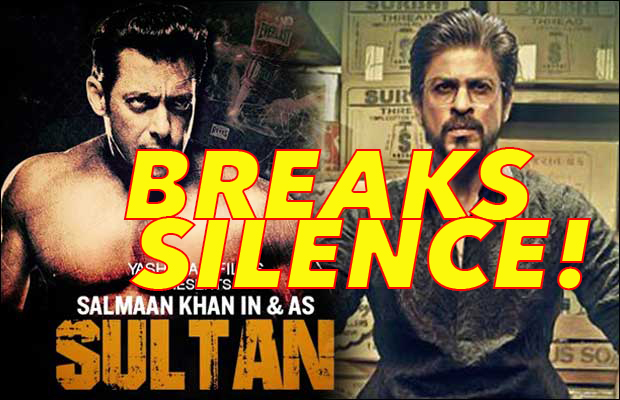 [tps_footer]As we all knew that Salman Khan’s Sultan and Shah Rukh Khan’s Raees were all set to clash with each other on Eid this year. But then we came to know that Shah Rukh Khan starrer Raees might not release this year. So now we just have Sultan on Eid.

In an interview with media, when Salman Khan was asked about Raees, he said that he thought they weren’t ready with Raees, that’s why they pushed the film. They needed a little more time to get their product ready. He also added that a major problem is that India is still 25,000-30,000 screens behind to be able to encourage a clash of this stature. They don’t have that many theatres and screens.

Maybe with time, it will open up. He said, hHumare paas abhi kuch 5,000 screens hai, that also gets divided with regional films. So, we don’t have that bandwidth to accommodate two big films. Panvel ke bahar chale jao, theatres hi nahi milenge. So such big films can never be able to come together.

He said that it’s not him or Shah Rukh, our distributors would want as many prints of both the films. The ratio of theatres divided would have been 30-70, 40-60, 50-50. It will be different in different places, so business will get divided. Till the time we don’t have the 20,000-plus theatres, the film industry isn’t going to grow. But right now, even two small films cannot clash because of that. The lack of screens has a huge impact on every film in the industry. Even the younger heroes would need screens. Tomorrow, Tiger Shroff’s films will come in the same number of screens as us because everyone would like to see him. He’s a mass hero now.”