Comedian Kapil Sharma is in the news for all the wrong reasons after his ugly spat with Sunil Grover on a flight from Australia to India.

A couple of days after their ugly fight, Kapil Sharma finally took to twitter to apologizes Sunil Grover. Kapil Sharma apparently had a fight and humiliated Sunil Grover while on a flight from Australia to India. This turned out to be ugly and left everyone shocked, including the passengers travelling on the flight.

Well, yesterday Kapil took to twitter and expressed that he is sorry for what he did and that he is also upset over the same. He wrote, “Paji @WhoSunilGrover sry if I hurt u unintentionally.u knw vry well how much I luv u. M also upset .love n regards always:)”

Few hours after Kapil Sharma’s tweet, Sunil Grover has finally broken his silence over the issue. Sunil Grover has hit back at Kapil Sharma and has exposed him like never before. In the most polite way, Sunil said in his long post that not all are as talented and as successful as Kapil is.

He also thanked Kapil Sharma in a sarcastic way for making him realize that it’s his show and that he has the power to throw anybody, anytime. He also advises Kapil Sharma to not act like a “God”. 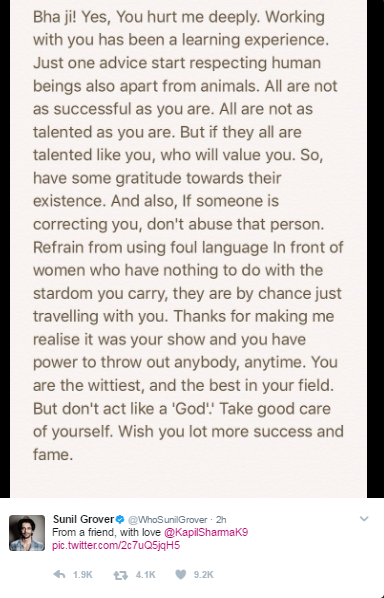