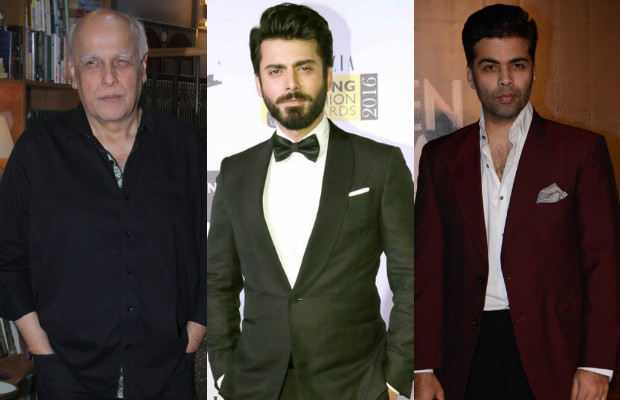 After the Uri attacks and the recent Baramulla attacks, there is a demand of banning Pakistani actors in India. Well, the country has divided into two sides, one supporting the ban and others against the ban. Bollywood is also divided into two sides for the same. There are people who are upset for mixing art and war. Some are upset about Fawad Khan’s ban in India. An open by Major Gaurav Arya is a must read!

Our boys have just about returned from across the Line of Control after a very successful surgical strike. The entire nation is delirious with joy; the entire nation, except a few.

Today, I was part of a panel discussion in JNU, interestingly called “Intellectual Terrorism”. The term is self-explanatory, though wide-ranging. I will discuss one type of intellectual terrorism here. The proponents of this type of terror are to found in every walk of life, but the roots of this disease are embedded in some institutions of higher learning. More of that some other time.

Will sending Pakistani artists back, stopping cricket and business with Pakistan actually end terror from Pakistan? No, it most certainly will not. But there is an emotion called solidarity. You cannot make films, play cricket and do business as if everything is fine, because it is not. It makes the soldier wonder aloud, “Why should I alone bear the weight of conflict?”

This conflict between India and Pakistan is not the soldier’s personal war. He is dying and killing for you and me. Imagine a situation in which the soldier felt, and behaved, like Karan Johar and Mahesh Bhatt? Imagine if a soldier walked up to his superior and said, “Sir, while I am dying on the Line of Control, these people are going about as if everything is absolutely fine between the two countries.”

How many of you would like it if a soldier felt that this was not his personal war, and he, like Mahesh Bhatt, should walk across the Line of Control and shake hands with a Pakistani soldier? Why should he alone sacrifice for India, when others were making merry?

A soldier will die before the thinks of such treason, but its, certainly, food for thought, isn’t it? Patriotism and sacrifice is not the sole responsibility of the soldier. India is Mahesh Bhatt’s country, as much as it is the soldier’s.

For 70 years, Pakistan has been killing Indian citizens. Are we so inured to the pain of our fellow brethren that making a movie or playing a cricket match takes precedence over a soldier’s mourning home?

18 families have been shattered like glass. Not a word for them by our Bollywood royalty, mind you. But the pain of Fawad Khan’s departure is too much to bear, it seems. A tweet in support of Pakistani artists is mandatory.

These directors and producers will have you believe that before Rahat Fateh Ali Khan sang for Bollywood, there was no music of significance in the Hindi film industry. The cricket board is so busy making money that a widow’s silent sob and an orphan’s scream does not matter. What actually matters are day and night matches between India and Pakistan? The most keenly contested sporting event in history, they say; even better than the Ashes.

And the soldiers? Well, as far as they are concerned, they are on another planet, far removed from the glitzy Bollywood studios, and the teak-paneled walls of the stately boardrooms of the BCCI. The blood, the mud, the screams and the exploding gunpowder are just distant and inconvenient, not very different from traffic during the Mumbai monsoons. Life must go on.

It’s easy to ask for peace when you are a thousand miles away from the Line of Control, and your primary concerns are which party to attend this evening and where to get financing for your next film.

Peace is not a punch line. It is the end result of war.

There is a 10-year-old girl, Aditi, who understands the nation and its ebbs and flows far better than Mahesh Bhatt and Karan Johar. See her letter attached. Then see the poster made by Mahesh Bhatt, which he so proudly displays.

I leave it to you to decide who speaks for you. My vote goes to Aditi. This little angel has the spirit of a soldier. The others have mala fide intent. 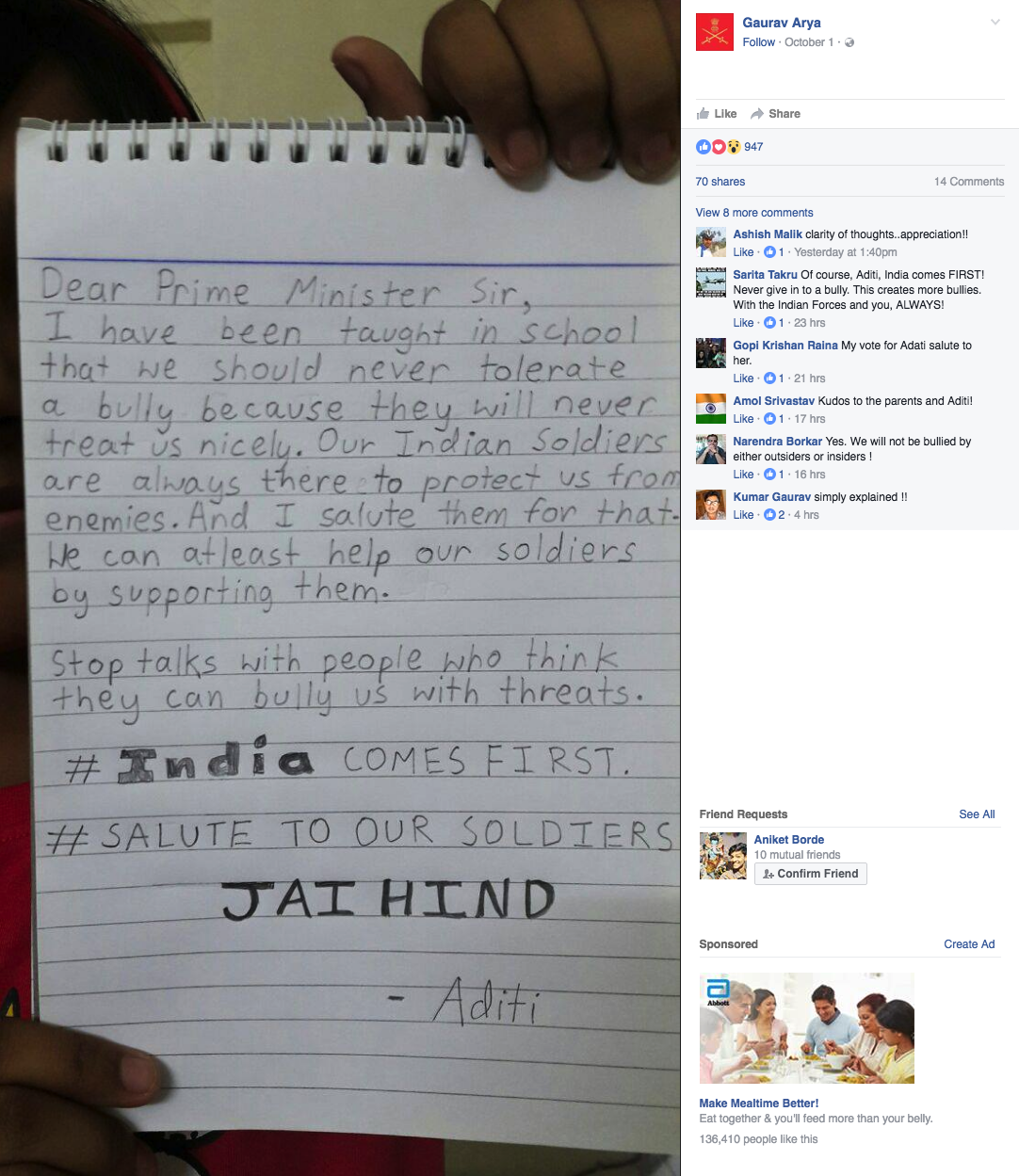 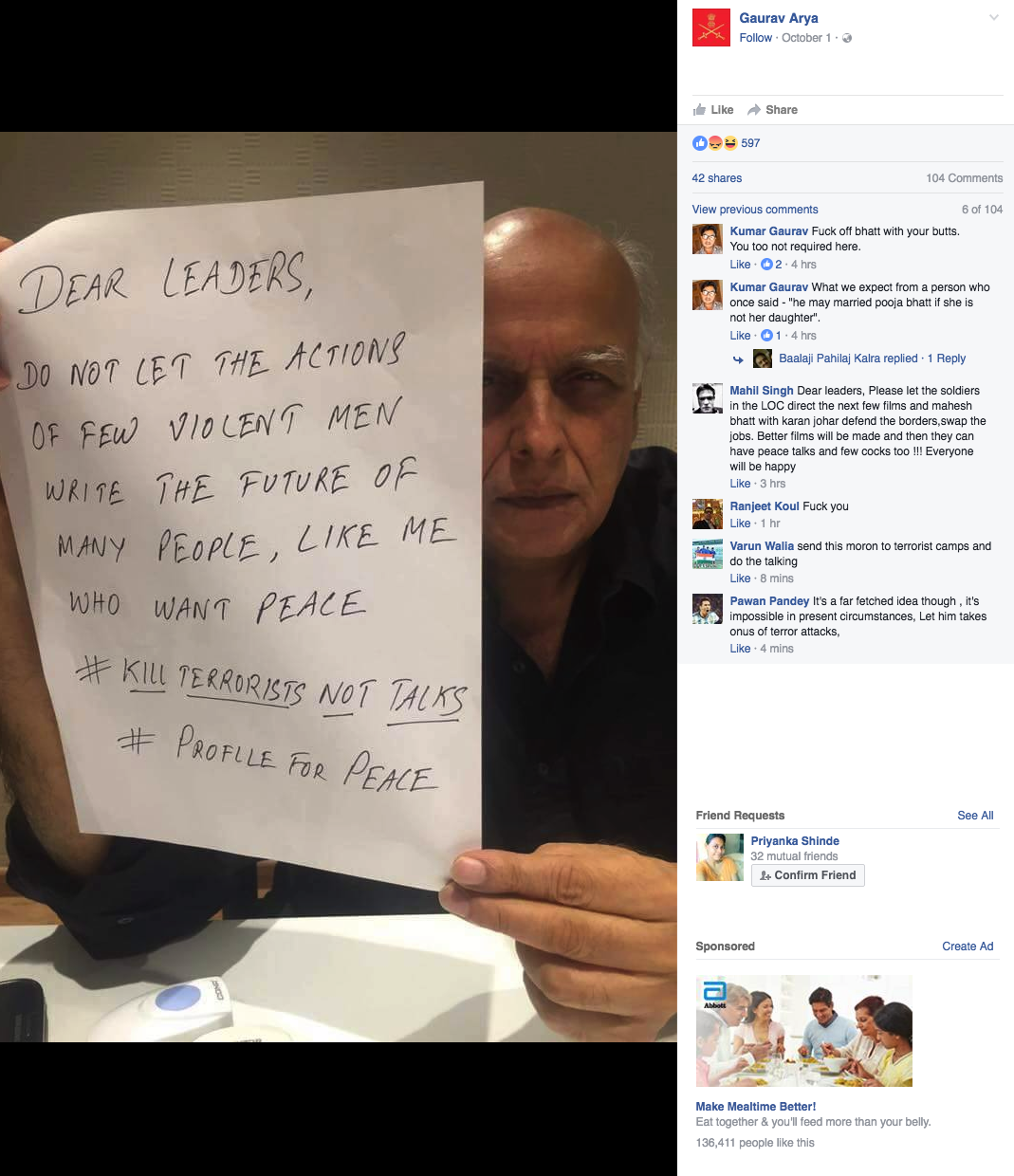