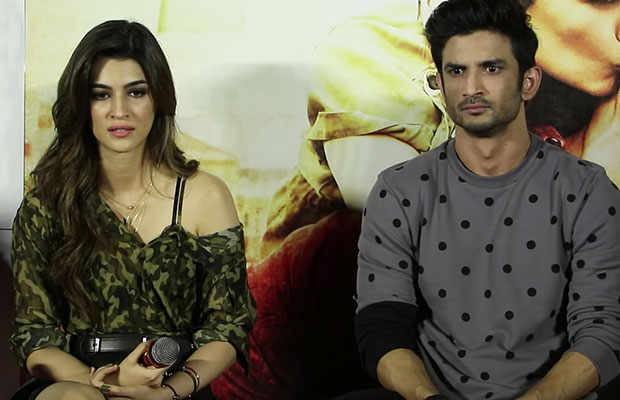 Today was the trailer launch of Dinesh Vijan’s Raabta at PVR, Juhu. The film stars the actors Sushant Singh Rajput and Kriti Sanon. The producer Homi Adajania, the director Dinesh Vijan along with the star cast of the film including Sushant, Kriti and Jim Sarbh were present at the trailer launch.

The two leads of the film were seemed to be in a very good mood. The leading lady of the film, Kriti shared how easy it is to convince Sushant for anything just by offering him chocolates. Sushant commented on his off-screen chemistry with the actress saying that both of them are engineers, so they connect really well.

The stars were asked upon several questions regarding the film. But one of the reporters asked them to comment on Kulbhushan Jadhav’s case. For those who do not know what the issue is, Kulbhushan Jadhav is a former Indian naval officer who has been sentenced to death in Pakistan on charges of spying.

The team of the film ducked the question saying that it is not the right platform to discuss such issues and they are only there for the trailer launch of their film. To this, one of the senior journalists objected saying that it was not a personal question but was a question of national interest which the stars should not neglect.

The MSD biopic actor replied to this saying that for commenting on any issue, first we need to know about all the facts. On probed further by the journalist saying that being a public figure, he should be knowing about such things, Sushant bluntly said that it is nowhere written that a public figure has to know about every issue of national interest.

The moment heated when Sushant even questioned back the media person asking her that if he asks her several questions on national issues, whether she will be able to answer all of those!

Sushant and Kriti starrer Raabta features a sizzling chemistry between the two of them. The film is all set to release on June 9, this year.

What do you all think about Sushant’s comment on the issue? Let us know in the comment box!