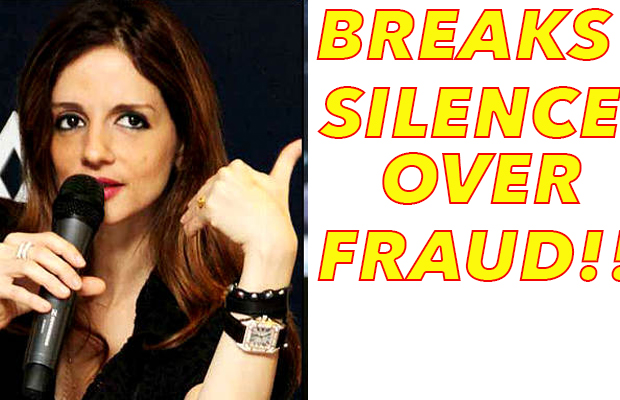 It has been reported that she has been accused of falsely projecting herself as an architect by Emgee Properties, (Naira Complex constructed at Siridao in Tiswadi, North Goa) a real estate firm. Managing partner Mudhit Gupta said the company paid Sussanne Khan Rs 1.87 crore in 2013 for architectural and designing services.

Sussane Khan who is currently in London, broke her silence over the fraud allegations and said in a statement to Indian Express,

“I am in London and this is my response. This is with reference to news appearing in a section of media where it has been reported that I have cheated Emgee Enterprises and misrepresented that I am an Architect. The said complaint is motivated and preposterous and has been only filed to intimidate me and pressurize me to withdraw the arbitration proceedings initiated by me in the first instance to recover my dues and damages resulting from breach of contract.”

“As a background I have challenged the termination of the contract and have invoked arbitration under the contract for recovery of my dues. As a counter-blast to the said proceedings Mr Mudhit Gupta only with the intention to harass and pressurize me to give into his frivolous counterclaim initiated the criminal complaint. I have not made any misrepresentations and have maintained the highest standards of ethics in discharge of my work.

I am going to take the arbitral proceedings to the logical conclusions and instead of getting intimated will respond to such frivolous complaint and will give a befitting response. Such complaints do not scare me rather it encourages me to stand up for the truth. The allegations in complaints are false and defamatory and I will take appropriate proceedings in accordance with law.”

The complaint alleged that Sussanne could not deliver her designs within the specific time, and what she finally submitted was sub-standard, Gupta alleged. That’s when the Egee group found out that Sussanne was not an architect as she had claimed. Emgee Properties’ legal counsel Arun Bras de Sa also claimed that police were reluctant to file an FIR in the matter, but finally, they filed it when they approached the court.

When forced to furnish details about her registration number, Gupta alleged that Sussanne Khan avoided giving them the number and finally, on inquiring with the council, the company found out the shocking news that she was not registered with it.

A cheating case has been registered under Section 420 of the Indian Penal Code. [/tps_footer]