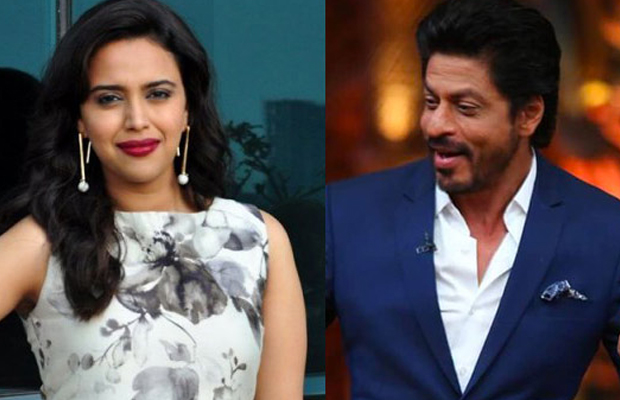 Swara Bhaskar has played secondary characters alongside Salman Khan in Prem Ratan Dhan Payo and a memorable role in Raanjhanaa amongst others. She is now gearing up the lead actress in Anarkali of Arrah, where she will be seen playing a character of a singer crooning double-meaning songs.

Like any other person in India, Swara had a wish to work with Shah Rukh Khan and romance him. She was given a chance to work with SRK by her Raanjhanaa director, Anand L. Rai, but it was not to be his lover but to be his mother!!! Yes you read that right!

In an exclusive chat with Filmfare, Swara revealed, “I love Shah Rukh Khan. I have grown up watching his films. Dilwale Dulhania Le Jayenge actually ruined my life.” She went on to narrate, “I told Shah Rukh sir in the presence of Aanand sir to please ask him to cast me in his film with him.” But the spunky actor was quick to lay down a condition. She didn’t want to play the superstar’s ‘sister’ or ‘daughter’. But the director threw a shocker her way. “Aanandji said, ‘Beta, I can only offer you his mother’s role!’ I was like this is the worst conversation I’ve ever had,” laughs Swara at the outrageous memory.

She was close, but not really close to her wishes coming true of working with SRK. Reportedly, the film has SRK paired with Katrina Kaif and Deepika Padukone.