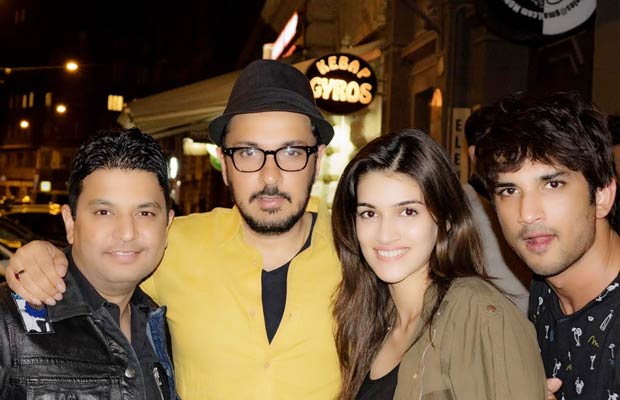 [tps_footer]The giant of Music and Film Industry T-series head Bhushan Kumar who will be jointly producing the upcoming love story, Raabta along with producer – director Dinesh Vijan visited the trio at Budapest recently. The team has been shooting in the beautiful city  of Budapest since the past two months. It’s also said that Deepika Padukone after wrapping up the last schedule of her first Hollywood movie xXx:The Return Of The Xander Cage has returned to Bollywood and she will make her comeback on our silver screen by performing a sizzling item song in Raabta. Already the chemistry and closeness of the lead actors Sushant Singh Rajput and Kriti Sanon were making news and now the biggies of Bollywood like Bhushan Kumar, Deepika Padukone are all set to make Raabta a blockbuster hit.

We can expect a real good album from Raabta as it’s produced by T-Series and Maddock Films and it’s directed by Dinesh Vijan. Remember the music of movies like Tum Bin, Cocktail, and much more, so we won’t be surprised to get some unforgettable melodious and youth-oriented songs from this trio. Raabta is set to release on Feb 10, 2017, and we wish the best to the entire team. Both, Bhushan Kumar and his wife Divya Khosla Kumar are a power couple and Divya has directed youth-oriented movies like Yaariyan and Sanam Re which has been a huge success. We hope very soon this power couple will come up with a new project to work together.[/tps_footer]