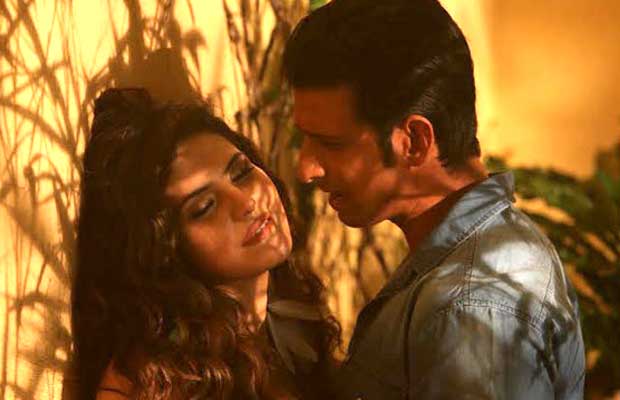 The moment we think about the two words Hate and Story together for a movie all that comes to mind is sex, scandal, love, revenge, and lust. Well the next sequel to the Hate Story Franchise has lived up to the expectation of its fans, the movies trailer is out and as expected all that we see it a lot of skin show, exquisite love expression scenes
and a story of revenge hidden behind all this.

The trailer was a little hard hitting, extreme and intense but if you could not handle that you will definitely be in shock to see the next song release ‘Tumhe Apna Banane Ki’ from the movie. The song is a remix from a 1991 movie ‘Sadek’ but the lyrics, the scenes and the meaning of the whole song has been redefined in this movie. We have brought to you a hot and steamy video of all the behind the scene actions from the sets. You will be amazed to see our quite and sincere Sharman Joshi act wild with his on-screen love Zareen Khan to give the audience some of the most exquisite and hot scenes of the recent times.

The most extra-ordinary thing about ‘Hate Story 3’ is its star cast, previously we had seen T.V actors or less popular faces in the movie but this time the star cast comprises of very well known faces and even some accomplished stars. The lead in the movie will be played by Zareen Khan, Sharman Joshi, Karan Singh Grover and Daisy Shah. In the
movie Sharman and Zareen are a madly in love couple whose love is threatened by Karan Singh Grover. Well the song is hotter than ever and so is the star cast, now all that we need to wait and watch for is how the audience reacts to the movie.