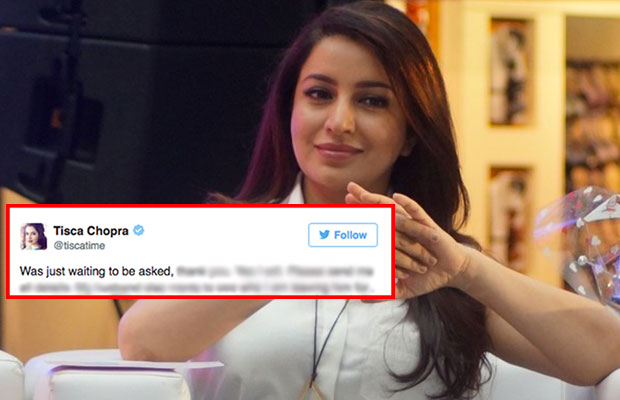 Fans don’t leave a single chance to interact directly with their favourite stars and no place can better than Twitter for the same. One of the fans of Bollywood actress Tisca Chopra took a chance and expressed his love for the actress. A twitter user, name Rahul tweeted asking Tisca Chopra if she will marry him and her reply to it was EPIC!

The fan tweeted on twitter asking, “@tiscatime will u Marry me?”

Well, wondering how happy the guy must be after getting an unexpected response from the actress. The actress, who is married to Sanjay Chopra, gave an epic, witty and smart reply to the marriage proposal she received from a fan.

Tisca replied, “Was just waiting to be asked, thank you. Yes I will. Please send me all details. My husband also wants to see who I am leaving him for.”

Fans are already in love with Tisca Chopra over her recent confession on casting couch. Tisca had shared how she sneaked out of a casting couch incident and since then the actress has become everyone’s favourite. The elegant looking actress has made an awesome comeback!