Sanjay Leela Bhansali’s Padmavati has hit the headlines once again.

Shockingly, a dead body with anti-Padmavati slogans written was found hanging in Nahargarh Fort, Jaipur. A message on the stones read, “We don’t burn effigies. We kill.” Threats written on the stones next to the dead body. The other threat reads, ‘Padmavati ka virodh’.

The president of Karni Sena has denied their involvement in this. He has addressed this as a ‘suicide’ and not a protest against the film.

“This could be a suicide. This is not our way of protest. We condemn this,” says Mahipal Singh Makrana, Karni Sena President.

“This is not our way of protest. I want to tell people not to resort to such methods,” Makrana added.

Interestingly, this news comes exactly a day after the British Board of Film Certification (BBFC) certified Sanjay Leela Bhansali’s film in the UK. Read here to know more: Is Padmavati Releasing In Britain? Here Is The Real Truth

Citizens are getting upset as the film is banned in quite a few states. The political parties are taking the decision on banning the film, instead of addressing the important issues of the country.

Twitter has reacted to the recent shocking news that is all over on the internet: 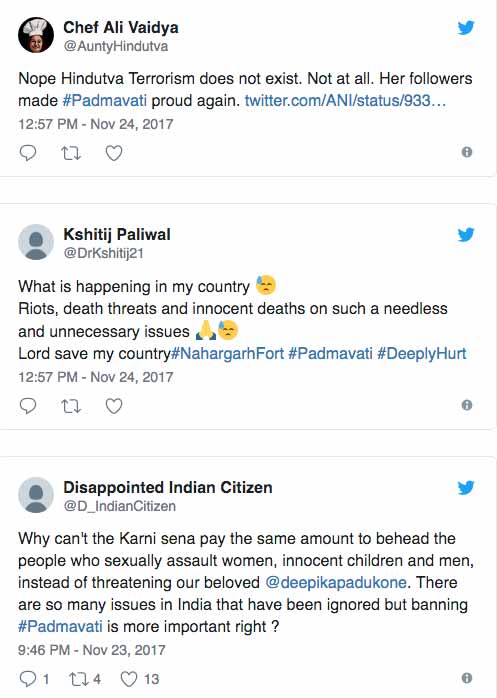