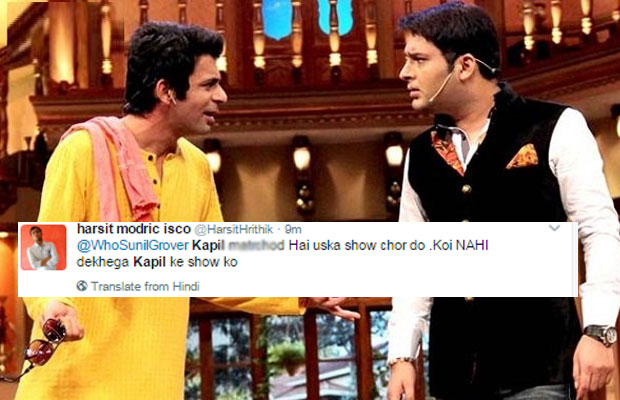 The very famous comedians form The Kapil Sharma Show, Kapil Sharma and Sunil Grover recently indulged in an ugly spat. It all started when the duo were returning with their team from their tour for their live show in Australia.

Kapil had downed a couple of drinks and started misbehaving with Sunil in mid air, mid-night when everyone was asleep. Not just Sunil, passengers were also taken aback.

Apparently, Kapil verbally abused and hit him while they were returning together. When asked Kapil about this he said, “All this is rubbish. Nothing of this sort has happened. Good that you gave me a call to clarify. Me and Sunil share a healthy vibe and he is like my big brother.”

Now Twitterati as we know always speak their mind on any issue be it. They have reacted to this episode too. Check it out:
Following the ugly spat, it was also reported that Sunil stopped following Kapil on Twitter. When asked about this, Kapil clarified, “I and Sunil fight a lot, but there is no problems between us.” He further added, “Please follow the truth. All this news is fake.”

As per the report, Kapil Sharma kept on insulting Suni Grover by saying, “Tu hai kaun? Tera show flop ho gaya tha, tu mera naukar hai, tu Australia mein bhi jo show kiya khude se woh flop tha…” (Who are you? Your show was a flop, you are my servant, the show you did in Australia was also a flop). Apparently, the rest of the cast interfered and things settled.

@KapilSharmaK9 @WhoSunilGrover Even Siddhu ji cannot save the show if Grover leaves the show &anyways Grover is far more talented than KS.

@KapilSharmaK9 @WhoSunilGrover Kapil show is ntng widout grover. Once Grover is on stage u can make out d nervousness on Kapil’s face.

Dear @KapilSharmaK9 don’t let success get on ur head https://t.co/IxEDLWdEKs

Finally unfollowed the person @KapilSharmaK9
Who is more egoistic and pride of being a self made star.
Fame is temporary, respect is 4ever

@KapilSharmaK9 @Tksshowofficial
It’s very shameful of u to behave such irresponsibly wid co-star..@WhoSunilGrover
U lost a fan today…

Seems @WhoSunilGrover had a better fanfollowings at Sydney that irritated @KapilSharmaK9. Platform missing else former is better, sheer luck

@News18India maybe it gets them publicity. But more likely kapil sharma is jealous of #SunilGrover because guy is a genius..specially as doc

Sunil needs to speak abut it..
High time.. it’s strange how there is no valuation of Kapil ” statement.
Media is cheap and corrupted!!