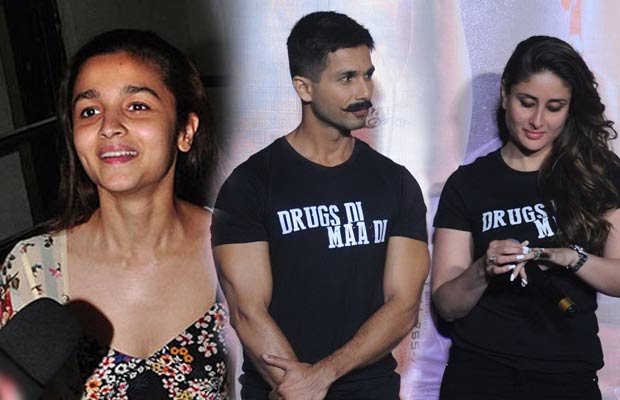 [tps_footer]Alia Bhatt, Kareena Kapoor Khan and Shahid Kapoor will soon be seen in the film ‘Udta Punjab’. The movie also stars actor Diljit Dosanjh apart the stated actors. The trailer launch of the film was extremely entertaining with Shahid and Kareena making an appearance on the same platform. The trailer of the much-awaited movie has impressed the masses to the core.

Recently, Alia Bhatt was snapped at the airport and was asked a tricky question. The cute looking actress was asked about her reaction on being trapped between Shahid Kapoor and Kareena Kapoor Khan. Well, the Kapoor & Sons actress avoided the question and walked away from the same.

We assume that Alia does not want to be in any controversy regarding this matter. Alia who is otherwise very frank with the media avoided commenting on the matter altogether. The actress is soaring high with success these days with many credible films in the kitty.

Alia Bhatt will soon be seen in the film ‘Udta Punjab’. The movie is directed by Abhishek Chaubey and will see Alia in the character of a Bihari migrant. The first glimpse of the film is highly appreciated. The film is based on the sensitive subject of substance abuse in Punjab.

The Highway actress will also be seen in Gauri Shinde’s next directorial opposite Shah Rukh Khan.[/tps_footer]