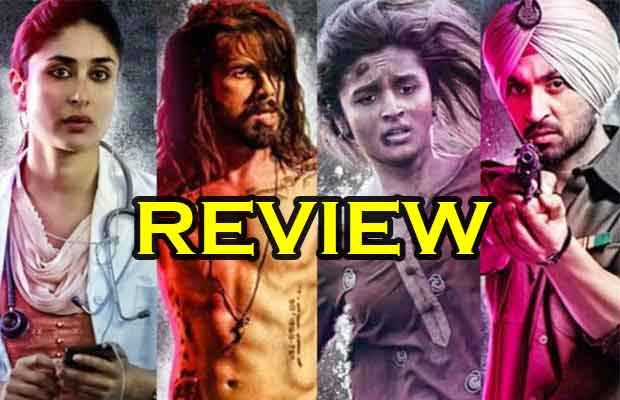 [tps_footer]Sometimes you can tell when a filmmaker had so much good material he did not know what to leave out. At times Udta Punjab feels like writers Abhishek Chaubey and Sudip Sharma were bothered by their own greediness with the subject of substance abuse in Punjab.

The film opens with a brilliant scene of an athlete warming up to discus-throw a packet of heroine over the line of no control into India. The packet is found by a farm-worker who’s smart enough to know she’s hit the jackpot. This sets the girl-with-no-name (Alia Bhatt) on a slippery downward spiral, a victim of circumstance and some bad decisions.

Across the state, a successful underground bhangra singer, Tommy the Gabru, a ‘cocaine da shaukeen’, is singing about drugs at a rock concert. The ‘Chitta ve’ song is intercut with scenes that introduce us to the four principal characters – corrupt cop Sartaj, a do-gooder doctor and the farm hand. Given the multi-narrative style of storytelling, these lives do intersect in some way or another.

Local cop Sartaj (Diljit Dosanjh) has no qualms taking his share of a cut for letting through consignments of drugs through check-posts. But when the problem reaches his doorstep, he finds the motivation to weed out the people behind the trade. Egging him on is drug rehabilitation specialist Dr. Preet Sahni (Kareena Kapoor Khan), a doctor devoted to helping addicts.

In this Punjab there are no jovial uncles and delightful grandparents, no swaying mustard fields and girls singing on tractors. And there is no upside to sampling or using substances. Characters are shown ODing, being imprisoned, manipulated, even killing to get closer to their next high. Chaubey does not paint a pretty picture. He pulls you in this world, and reminds you through a dialogue, that Punjab should not become another Mexico.

Even though it’s a bit over the top in the beginning, especially Tommy’s world with a caricatured entourage and groupies making up a ridiculous song about Coke and a rhyming body part, later on Chaubey evicts a background score all together. The silence of the surroundings let you absorb completely the emotions and fears, wishes and worries of the characters. Mostly you feel this futility and the evils through Alia Bhatt and Balli (Prabhjyot Singh), the teenager tormented by his addiction. The actors – principal and supporting – suck you into their hopeless world. Even Rajeev Ravi’s camera does not add a veneer to this new age ‘Green Revolution’.

Bhatt embraces her role and nails the part of a Bihari girl whose hockey dreams are cast aside when reality bites. Shahid Kapoor’s Tommy is a touch OTT but he makes light of the tragicomic character and his predicament. His crowning moment is during a jail scene when he realizes the deep and dark influence of drugs on both himself and his fans. Dosanjh is pitch perfect as Sartaj and it’s a relief to see Kapoor Khan try something outside of her comfort zone.

While Chaubey wants to focus on the deep impact of addiction, not just on the user but also those closest to him/ her (family and friends), we see the lengths people will go to in order to get a fix, how drugs are used to tame people, the power of popular culture in promoting a lifestyle and the nexus between smugglers and the police. The tracks of political participation and myriad ancillary characters bog down the narrative.

Udta Punjab captures a microcosm of a problem that afflicts several Indian states, and uncovers an issue that requires urgent attention with a firm hand and cinematic resourcefulness. Enjoy this trip.