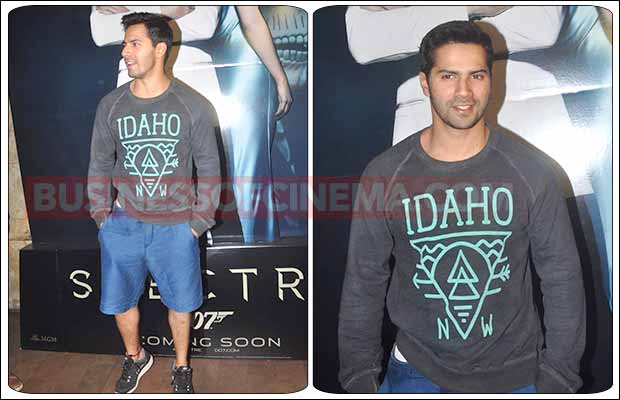 [tps_footer]Almost all B-town celebrities are very much concerned about their attires and looks. Well, drifting from the norm Varun Dhawan is one actor who is always at his casual best. The newbie Varun Dhawan was recently spotted at the screening of the film ‘Spectre’. Known for his love for action movies, Varun surely couldn’t give a miss to this one. The actor is being termed as the next big thing of B-Town and is racing high on the success ladder.

Sporting a grey sweat shirt and blue knee length pants, Varun definitely proved that he is a slave of comfort and not styles. The heartthrob is currently busy with the promotional events of his upcoming film ‘Dilwale’. The film is directed by Rohit Shetty and also features Shah Rukh Khan, Kajol and Kriti Sanon in lead roles apart from Varun Dhawan.

The film ‘Dilwale’ is surely a cherry on the cake for Varun’s career. The few films old actor will already be brushing shoulders with the King Khan. The glimpse of the film has already released and is impressive to the core. Varun will be seen opposite Kriti in the movie ‘Dilwale’.

Apart from the movie, Varun Dhawan is creating waves globally too. The young actor was recently all over the micro blogging site Twitter when Dave Bautista challenged him for a fitness match. Varun Dhawan who is also a diehard fan of Bautista couldn’t believe his eyes and has daringly accepted the challenge.

Apart from the film ‘Dilwale’, Varun is also gearing up for the film ‘Dishoom’. The film also stars actors Jacqueline Fernandez and John Abraham in lead roles. Varun Dhawan’s upcoming film ‘Dilwale’ is all set to hit the screens on December 18th, 2015. The film is said to be one of the most awaited films of the year.