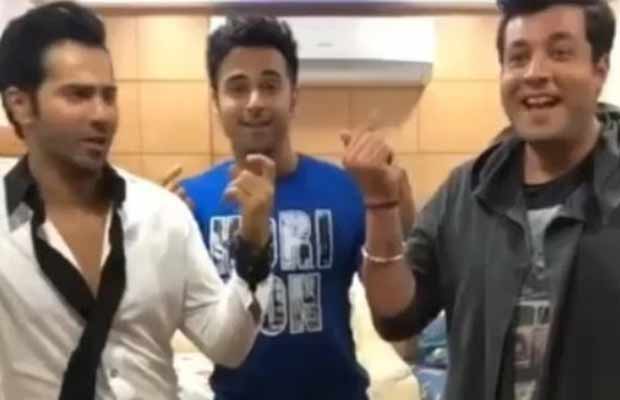 Varun Dhawan shared a funny video on his social media handle, where he is dancing with the Fukrey boys, Choocha and Hunny on the song ‘Tu mera Bhai Nahi Hai’.

Varun Dhawan and Varun Sharma have previously worked in Dilwale together and since then they share a great bond.

The trio are hilariously matching their steps on the song Tu Mera Bhai Nai Hai. Check out the video below.

‘Tum mera bhai nahi hai’ showcases the brotherly bond of the boys. It is a lingo used by most of the boys in our country.

The song is all about Hunny and Choocha’s bromance. The Fukras have gone a step ahead in their craziness, which makes the movie more anticipated.

The trailer of Fukrey returns received a lot of appreciation, and it shows how the Fukra’s are going crazier in their sequel.

The first installment of the Fukrey franchise proved to be a huge success. And now the makers are back with the sequel starring Pulkit Samrat, Varun Sharma, Manjot Singh, Ali Fazal and Richa Chadha in the lead roles.

Four years later, the Fukrey gang is back with Bholi Punjaban and the boys – Hunny, Choocha, Lali and Zafar. Fukrey Returns is anticipated to be the funniest and quirkiest project of the year and a perfect film to end the year with.

The film is produced by Ritesh Sidhwani and Farhan Akhtar and is directed by Mrighdeep Singh Lamba. The film will hit the theatres on December 8th, 2017.

The trio is seen doing the hook step in the video Varun Dhawan uploaded.

Tu mera bhai nahi hain . Actually to hain @fukravarun. Best of luck to the entire #Fukrey team @pulkitsamrat looks like a firecracker this one