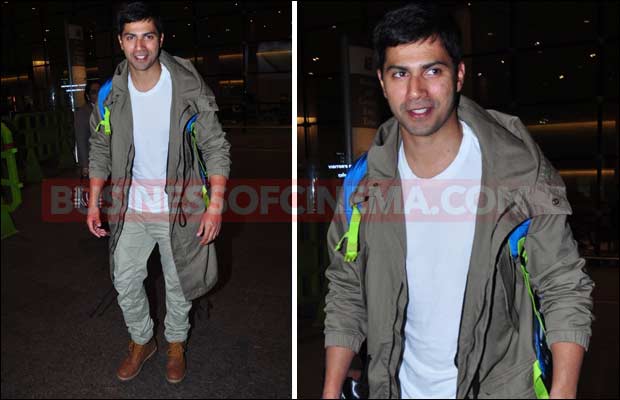 [tps_footer]Varun Dhawan, the ultimate charmer has been very busy after getting a successful launch pad from Karan Johar under Dharma Production movie Student Of The Year along with his co stars Alia Bhatt and Sidharth Malhotra. We got three new generation stars in the making of this movie and they are now the most desirable actors of B- town to work with.

Recently, Varun Dhawan was spotted at launch of Skybag backpack collection and media persons didn’t miss out on asking him about the recent news that he has signed a new project and it’s an ad deal of worth 3 crores. Varun, spontaneously rubbished this news and he sarcastically said, “If I would have had Rs.3 crore, I wouldn’t be sitting here.” haha.. But Varun you can’t deny that you are turning out to be one of the favorites of the ad world to get endorsements early in career. Hence, the rumours and speculations.

Currently, Varun has three films in his hands this year to shine on silver screen, Karan Johar‘s much awaited and shelved project Shuddhi, another movie Dishoom directed by his brother Rohit Dhawan, starring Jacqueline Fernandez and John Abraham and Judwaa 2, which is still being kept undercover and nothing much is revealed yet, but Varun surely has crores of investment on him, and we can’t forget his 300 crore deal with channel Star Gold, that has recently bought all his movies satellite rights. Keep roaring with success Varun !!

We didn’t miss out on knowing about his relationship with rumoured girlfriend Natasha Dalal, he is very protective about her and never speaks publicly about his relations with anyone and he managed to rubbish the news of his marriage happening this year. And Varun knows who is spreading these rumours, he said, “I have no plans of getting married right now, I don’t know why Arjun is spreading these rumours about me.”

So, it’s Most Wanted Munda, Arjun Kapoor who is spreading these rumours of Varun getting married soon. Thank God media is not blamed for this. Hahaha..

We wish Varun Dhawan and Arjun Kapoor a wonderful and a very successful career ahead ![/tps_footer]