Bollywood’s two veteran actresses Jaya Bachchan and Rekha who not very often talk or cross their paths due to their past equations, were clicked hugging each other at the recently held awards event. Midst all sorts of fun and power packed performances by Bollywood stars at the awards event, the glitzy night saw a moment that left everyone speechless.

Earlier, we got adorable pictures of two talking, hugging and greeting each other and now we have got a video of them sharing a very adorable moment. The moment when Rekha went and hugged Jaya Bachchan, everyone at the event was surprised and shocked.

It was even more surprising for everyone as Rekha hugged Jaya Bachchan, the moment when it was announced that Amitabh Bachchan has been bestowed with Best Actor award for ‘Piku ‘along with Ranveer Singh, who won for ‘Bajirao Mastani’.

One can see in the video from the awards show, which was aired last night on the television, the two veteran actresses who were loggerheads at one time, surprised everyone with unexpected gestures. What grabs all the eyeballs in the video is that Rekha who was allegedly very much in love with Big B, is cheering for Amitabh Bachchan even now.

The two beautiful legendary actresses, at one time starred together in the same film with Amitabh Bachchan. Rekha and Jaya starred together in 1981 film Silsila which also starred Big B. The movie is said to be inspired by the alleged real-life love triangle of its three stars, Amitabh–Jaya–Rekha. It was the most talked about love affair back then! 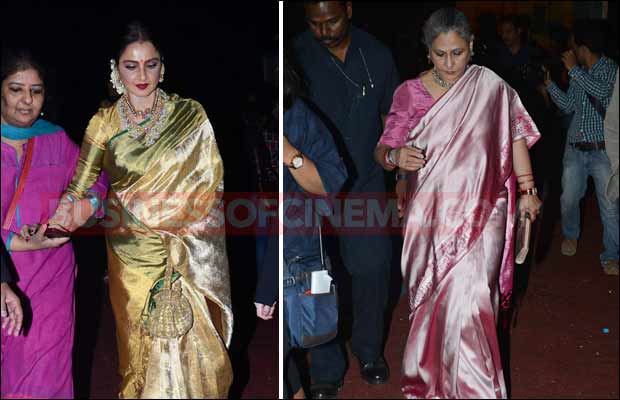