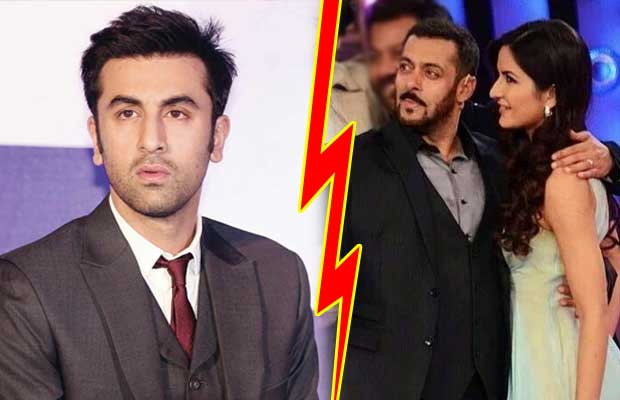 [tps_footer]Salman Khan has surely become a comforting friend for Katrina Kaif after her break up with Ranbir Kapoor. Salman and Katrina who were ex flames, are much in news lately for their secret meeting with each other. As we all know Dabangg Khan is one actor who is always ready to help his tinsel town friends when they need him.

Seems like actress Katrina Kaif has also found a leaning shoulder in Salman. Katrina and Aditya Roy Kapur recently were spotted at Salman Khan’s reality show Bigg Boss season 9. The two actors Aditya and Katrina visited the show to promote their film ‘Fitoor’. Both Salman and Katrina appeared to be all comfortable with each other on screen and the two also shared a nice chat off the screen.

According to reports, Salman and Katrina were engrossed in a deep conversation on the back stage of the reality show. The two stars were apparently discussing about Katrina’s break up with Ranbir Kapoor and the Kick actor was seen advising the beautiful actress.

Reportedly, the dare devil star Salman Khan who is always frank and open amidst the shutterbugs suggested to Katrina that she should be confident about her stance in the media about her break up, rather than excusing the questions about Ranbir. The superstar advised Kaif that she shouldn’t excuse herself all the time and should face the fact.

As we all know, Bang Bang actress Kat is always very reserved amidst the shutterbugs and also refuses to comment on her personal life. Now whether Katrina Kaif practices what Salman Khan has preached is yet to be seen.

On the career front, Dabangg Khan is busy with his upcoming film ‘Sultan’ and Katrina is looking forward for the release of her film ‘Fitoor’ opposite Aditya Roy Kapur.[/tps_footer]