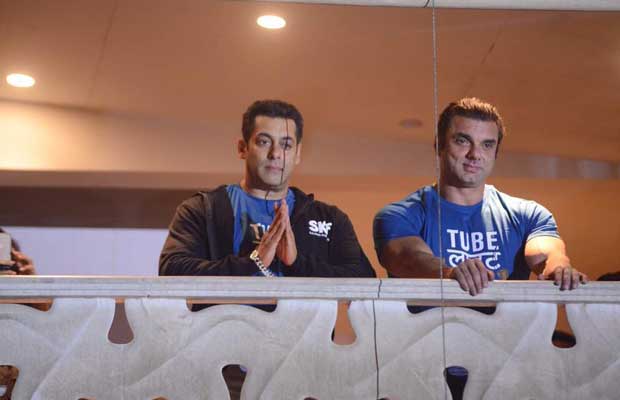 Salman Khan did not want his fans to disturb his neighbourhood late night during the trailer launch of Tubelight.

Bollywood actor Salman Khan released the trailer of Tubelight on Thursday evening. The Sultan actor came out on his balcony at Galaxy Apartment Bandra at around 9 PM, when the official trailer of the film was out. Salman came out specially to greet his fans, who were waiting for him since a very long time to catch a glimpse of him.

Salman was accompanied by his brother Sohail Khan, who also plays the character of Salman’s brother in the movie. The two were seen in happy and excited mood as they saw numbers of fans outside the Galaxy Apartment, Bandra. As Salman Khan waved to the fans, the noise and the banter increased.

However, Salman Khan was very considerate about the noise levels. He signed to his fans to keep the volumes low. The actor was concerned as the other people in the building and neighbourhood would be disturbed. This was a lovely gesture by Salman to keep in mind about the society members. Salman showed a very down to earth behaviour and even didn’t disappoint his fans.

before the official trailer launch, a special screening of the trailer was hosted for the media, which was attended by Salman Khan, Kabir Khan and Sohail Khan. When the trailer was being screened for media, he descended down the stage. as Salman got down from the stage, he was offered a seat but the actor chose to sit on the floor instead. Salman Khan looked very comfortable as he spread his legs on the stairs of the theatre and watched his own trailer.

Talking about Tubelight trailer, the trailer showcases amazing chemistry between brothers- Salman Khan and Sohail Khan that we were waiting to catch since years. Sohail Khan is a soldier in the Indian army. The backdrop of the film is the Indo-China conflict, and Sohail puts up a brave front and fights in the unsteady landscapes of Leh and Ladakh.

Salman as Laxman Singh goes out in search of his brother who goes missing after the Indo-China war of 1962. It’s crazy and equally high on emotions. Tubelight trailer also showcases how Salman Khan goes out to every extent to search for his brother Sohail Khan when others had already lost hopes.

Tubelight is produced by Salman Khan & Salman Khan and directed by Kabir Khan. It stars Salman Khan, Sohail Khan and Zhu Zhu. It is co-produced by Amar Butala. The executive producer is Rajan Kapoor, the associate producer is Garima Mehta and music is by Pritam. The film will release in cinemas worldwide on Eid.