After trolling Anushka over Virat’s poor performance in the T20 series this year, cricketer Virat Kohli became the knight in shining armor for Ae Dil Hai Mushkil actress and alleged girlfriend Anushka Sharma by posting a tweet in her defense.

When Virat under-performed, the entire nation blamed Anushka Sharma over trolls by claiming her to be the reason behind Virat’s performance. Virat Kohli angrily stood for her and expressed his disappointment quoting about how ashamed he was of people who trolled her even when she has always given him positivity.

Now that 2016 is closing down, Twitter released a list of tweets that have created an impact virtually. And Virat’s tweet for Anushka Sharma has been titled as the “Golden tweet of the Year”. The tweet was well appreciated by the people for defending Anushka and spreading good behavior. This tweet went viral in defense of Anushka Sharma over Virat’s poor performance in the series. 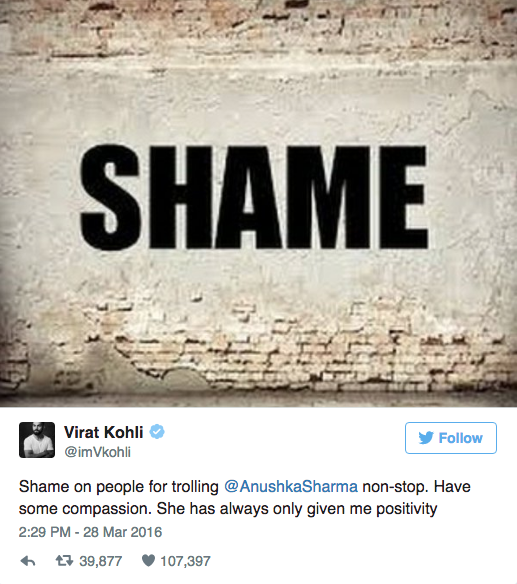 The tweet had nearly 1 lakh likes and 39,000 retweets. As per the sources, the Managing Director of Twitter of South East Asia and India, Maya Hari, said that the ultimate winner had to be Virat Kohli for standing up as a great role model and defending and saving a woman on a social platform.

This stand definitely needed to be rewarded and of course, the defending move by Virat Kohli was proven to be a great act of defense for his alleged love lady Anushka.