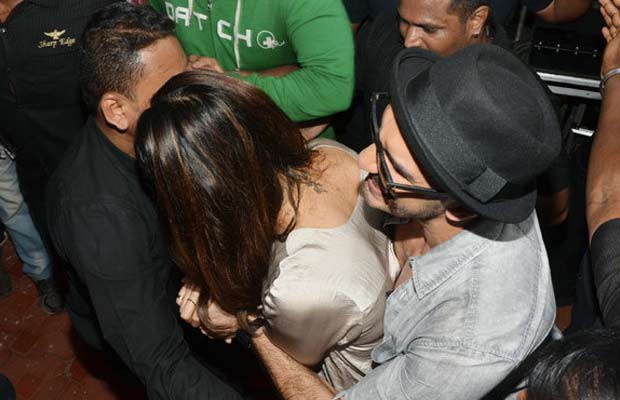 [tps_footer]Bollywood’s leading lady Deepika Padukone as we all know makes a good pair with ex-beau Ranbir Kapoor as well as with alleged boyfriend Ranveer Singh. The actress shares a good chemistry with both the actors on screen and will be seen soon with Ranbir Kapoor in ‘Tamasha’ and with Ranveer Singh in ‘Bajirao Mastani’.

With two films in the kitty, the actress has geared up with the promotions and the releases of the film. The ‘Piku’ actress is often spotted going on promotions with both the actors for their respective films. Lately, Ranbir Kapoor and Deepika Padukone released the first official trailer of their film ‘Tamasha’.

Both the actors were seen together after almost two years. While gearing up for the trailer launch event, Ranbir was seen protecting Deepika from behind while making their way to enter the venue. Ex-flame Ranbir was seen holding Deepika’s hand and the shutterbugs didn’t fail to catch the moment. Well, past is all done and dusted and everyone seemed to have a great time.

On the other hand, recently after the song launch of ‘Bajirao Mastani’ in Pune, the alleged couple Ranveer and Deepika who were leaving the premises of the venue were trapped and surrounded by the fans. The crowd went so crazy that it was unmanageable by the security itself. But well, no worries, Ranveer Singh who always has his eyes on his lady love Deepika Padukone, came to her rescue soon. The actor held her hand tight and like a true lover, protected her from the crowd.