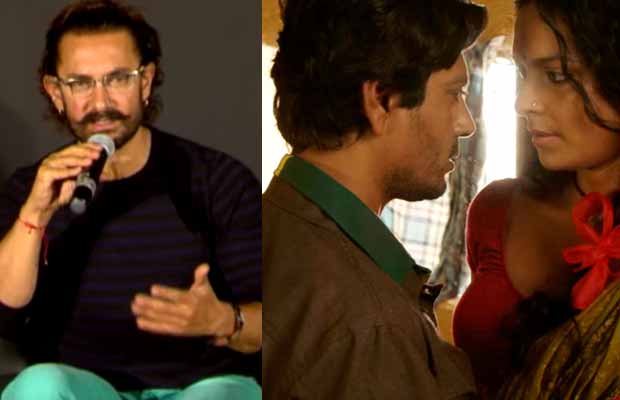 The ‘Dangal’ actor Aamir Khan had some choice words to tell when asked about the latest CBFC’s demands. He was at movie promotion when he was asked about the recent cuts demanded on Nawazuddin Siddiqui’s movie ‘Babumoshai Bandookbaaz’

The upcoming movie ‘Babumoshai Bandookbaaz’ has come under the scanner for its bold storyline and intimate scenes. Actors Nawazuddin Siddiqui and Bidita Bag are in in the movie as the main leads. The film has got 48 cuts by the CBFC and hence practically impossible to even release!

Earlier Alankrita Srivastava’s movie ‘Lipstick Under My Burkha’ was attacked for being a ‘very women-centric movie’ and thus a censorship controversy. While the movie was finally released without much loss, the country has given it full support.

The movie was scandalous and bold but it was received very well at the box office and is still doing successfully even though CBFC asked for many scenes to be cut from the final version.

Aamir Khan went on to say that he didn’t understand the concept of censorship and has always repeated his confusion over what is offensive. ”I feel…I don’t know how relevant censorship is today…”

Aamir Khan said that the main role of CBFC was to pass the movie with a certificate rather than asking for cuts and heavy censorship in the movies. ”And as far as my knowledge goes, the CBFC, in any case, is not supposed to censor it. It’s supposed to grade the film, you know… to which age group can we show this film…”

But the actor was positive and added ”That’s how we should proceed. They are also Mr Benegal’s recommendations too, so hopefully, things will get better…”

Aamir Khan was promoting his new film Secret Superstar with his wife Kiran Rao and co-star Zaira Wasim. The movie is produced by Aamir Khan’s home productions. The trailer was released yesterday and we must say that it has caught out attention! It is set for a Diwali release this year.

Watch Video : Aamir Khan REACTS On 48 Cuts By Censor Board On Babumoshai Bandookbaaz

Here it is. Tell me what you think. #SecretSuperstarTrailer Love. a.https://t.co/1recwfop1f