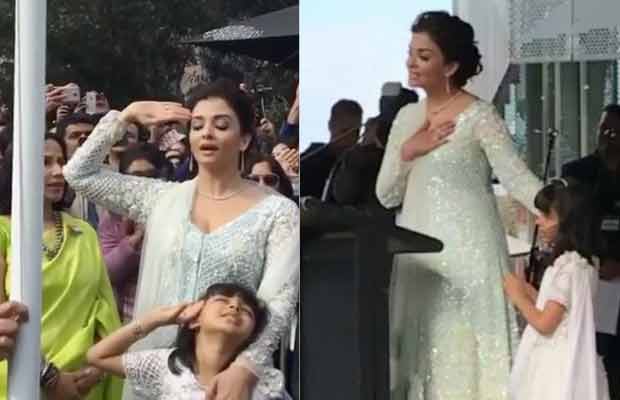 Bollywood actress Aishwarya Rai Bachchan recently experienced the proud moment along with her daughter Aaradhya in Melbourne. Aish, who was there to attend Indian Film Festival Melbourne, hoisted the Indian flag as a part of their celebration of 70th year of India’s Independence. Not only Aishwarya Rai Bachchan but her daughter Aaradhya too joined the moment of pride and the two sang National Anthem after flag hosting.

That’s not all, Aishwarya also gave a speech in Hindi and later she translated same in the English with daughter Aaradhya standing beside her. Thanking Melbourne for giving such an honour to her, Aishwarya said, “Thank you so much Melbourne, thank you everyone for giving us such a moment of pride and happiness with so much love and warmth. Celebrating our 70th Independence Day will forever be such a beautiful memory for me and my dearest Aaradhya.”

Other Bollywood celebrities who were present at the event were filmmakers like Karan Johar, Dangal fame Nitesh Tiwari, Baahubali producer Shobu Yarlagadda, Shilpa Shetty, Sushant Singh Rajput, Rajkummar Rao and many others.

Meanwhile, on the work front, Aishwarya Rai Bachchan will begin shooting for her next Fanney Khan, in which she would share the screen space with Anil Kapoor.

Absolutely BLOWN away by the talent Melbourne has! What an honor to judge the Telstra Bollywood Dance Competition along side these two superstars @malaikaarorakhanofficial & @karanjohar @mitulange what you do for the Indian film industry in Australia is incredible. ?? So much fun and well done to all involved! ???????? @iffmelbourne