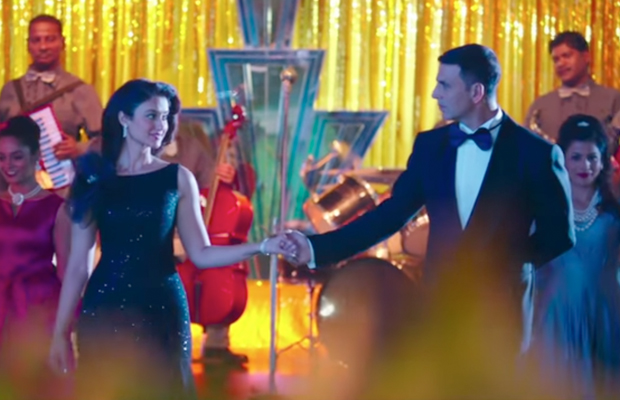 [tps_footer]’Rustom’ starring Akshay Kumar, Ileana D’Cruz and Esha Gupta in lead roles is filled with melodious songs. The serious film which is based on the Nanavati case is also high on romance. Akshay Kumar who gained amazing reviews with ‘Airlift’ will play the role of a naval officer in ‘Rustom’. The film will explore Akshay’s versatile acting skills yet again.

The Khiladi of the tinsel town has already gained laurels for the trailer of the film. The songs of the film are on the chartbusters since a long while. The film has already unveiled three songs namely Tay Hai, Tere Sang Yaara and Rustom Vahi. The latest song to release from the film is Dekha Hazaro Dafaa.

It can be rightly said that ‘Rustom’ is going to be one of the sole films of the year with such amazing romantic tunes. The just released song Dekha Hazaro Dafaa features Akshay Kumar and Ileana D’Cruz. The two stars who are drenched in love in the song are conveying their emotions for each other in an expressive manner.

The ballroom dancing sequence is a treat to the eyes. The love filled gestures and the eye contact makes you drool. The lyrics of the song are thoughtful and poetic.

Dekha Hazaro Dafaa is crooned by Arijit Singh and Palak Muchhal. The lyrics are penned down by Manoj Muntashir. The blissful track is composed by Jeet Gannguli.