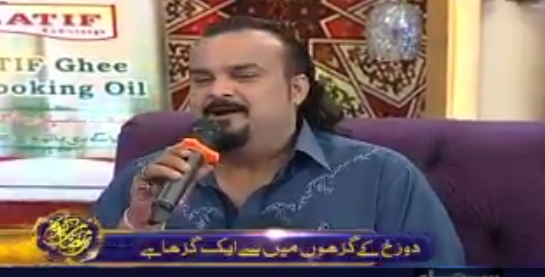 [tps_footer]One of the most renowned and talented Pakistani Sufi singer, Amjad Sabri of the noted Sabri Brothers group, has been shot dead in the southern port city of Karachi. Amjad Sabri, who was shot several times, was travelling in his car with his brother. While he was driving in his car, reportedly a motorcycle pulled up alongside the vehicle and the attackers opened fire on them, leaving Amjad Sabri dead and his brother wounded. The police there has described this as ‘act of terror’.

His killing has left everyone in shock naming it as an act of terrorism. Reportedly, neighbours and relatives gathered outside the singer’s house to offer condolences while the TV channels broadcast his songs in tribute.

Fakhre Alam, the Chairman of the Sindh Board of Film Censors, had tweeted, “Amjad Sabri had submitted an application for protection as per his family but Home department did NOTHING…Shameful & disgusting”

Amjad Sabri was live today morning. Listen to his emotional kalam which proved to be his last. RIP. #AmjadSabri pic.twitter.com/aJfszplR9V

Hailing from a long line of legendary qawwals, Amjad Sabri inherited the art and charm Qawwali from his father Ghulam Farid Sabri. A man with international fame, he had a voice rich with the emotion of a faithful devotee.[/tps_footer]