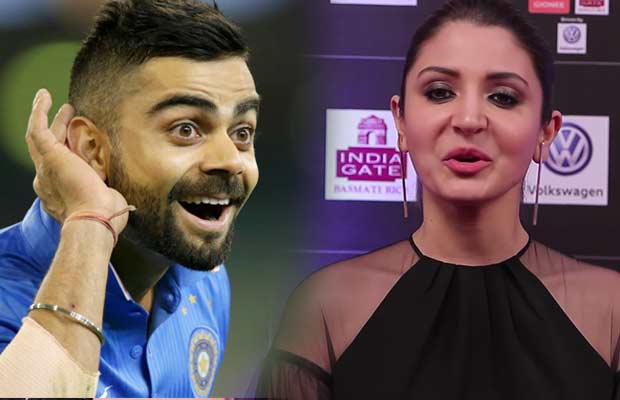 At the awards show, the celebrities were seen stylish at their best and also interacted with the media. Anushka Sharma, who has geared up for the release of her production film Phillauri, was also spotted.

While addressing the media, Anushka Sharma was asked about her boyfriend Virat Kohli. The actress was asked to comment on the recently shared photo of her by Virat Kohli on Women’s Day. As soon as Anushka heard Virat’s name, she smartly ignored the question but had the best reaction. (Don’t miss video below)

Virat Kohli earlier expressed his love for Anushka Sharma and for his mom. The dashing star had wished Happy Women’s Day to every woman. But he has two special women on his mind – his mother and girlfriend

Virat took to Instagram and shared a wonderful selfie collage of him with his mom and girlfriend Anushka Sharma. He captioned the picture as, “Happy women’s day to every woman out there, but specially to the two strongest women in my life. My mom for looking after the family in toughest times in life and anushkasharma for fighting against the odds regularly and standing up for righteousness and changing the norms ❤#happywomenday.

WATCH THE VIDEO TO KNOW HOW ANUSHKA REACTED TO IT!