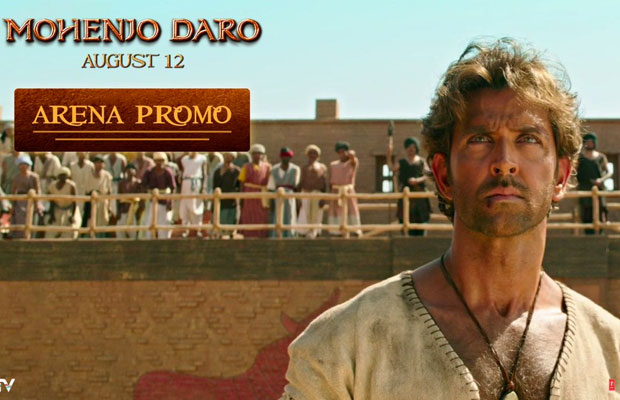 [tps_footer]Hrithik Roshan’s upcoming film Mohenjo Daro along with debutant Pooja Hegde will be released on August 14th. Directed by Ashutosh Gowariker, the trailer of the film and the songs has been gaining a lot of attention. Hrithik and his co-actress Pooja Hegde share a great chemistry in Mohenjo Daro.

Produced by UTV Motion pictures and Ashutosh Gowariker, a new Arena Promo of the film Mohenjo Daro is released, here’s the promo:

For the first time Hrithik will be depicting the role of a farmer. The Greek God of Bollywood Hrithik looks stunning in this promo. Hrithik’s fierce look, his aggression, his actions is all what this film awaits.

Mohenjo Daro is a film about a man who falls in love with his enemy’s daughter who is a dancer and it is set in the Indus Valley Civilization. Themed on romance through the cultures and ancient civilizations of Mohenjo Daro, Ashutosh Gowariker took over three years to build this film with the help of archaeologists whose lifework is documenting the Indus Valley civilization. The film has been picturized in the locations of Bhuj and Mumbai with short schedules in Jabalpur and Thane.

Ashutosh Gowariker and Hrithik Roshan united for the second time after the film Jodha Akbar which also featured Aishwarya Rai Bachchan. After the success of Jodha Akbar we are excited and eagerly waiting to see the magic they recreate in the upcoming film Mohenjo Daro.