Sunny Leone took her revenge from the crew member, who had earlier thrown a snake on her!

The Bollywood actress Sunny Leone has showed it to everyone that nobody can get away after messing with her. The actress will not spare anyone who plays a prank on her.

It was very recently when a video had gone viral of the prank which a crew member played on the actress. Sunny was on the sets of her next film, reading her script. And that was when a crew member, Sunny Rajani (coincidentally Sunny playing prank on another Sunny) threw a fake snake at the actress.

Needless to mention that it scared the hell out of the actress. She jumped up in the air scared and shouted out her lungs. Later she was seen chasing the crew member. Sunny herself had shared the video on social media writing, “My team played a prank on me on set!! Mofos!! @yofrankay and @tomas_moucka”

Well, that was indeed a scary prank. But Sunny is no less in playing pranks. Although her style is different and she believes in ‘sweet revenges’. The actress has posted another video in which she can be seen splashing two chocolate cakes on the face of the crew member from behind. Saying “Revenge is like sweet success”, the actress took her revenge in style and later got chased by the crew member!

My revenge!!! Hahahahahaha @yofrankay this is what you get when you mess with me!! pic.twitter.com/umUxEiVhPF

Sunny posted the video captioning it as, “My revenge!!! Hahahahahaha @yofrankay this is what you get when you mess with me!!”
Both Sunny and the crew member later enjoyed discussing their pranks on the social media. 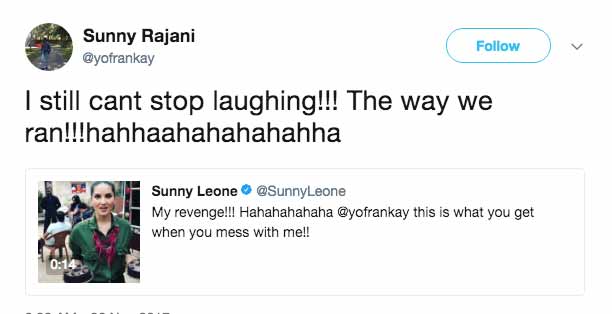