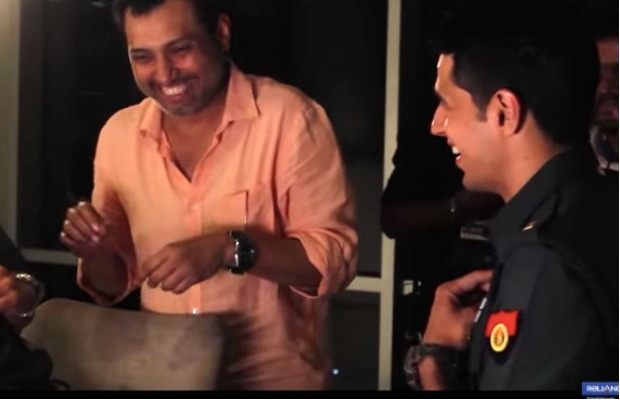 Neeraj Pandey’s espionage thriller ‘Aiyaary’ is all set to release this Republic day. The filmmaker who has time and again presented issues of social relevance with his films is immensely loved and respected by his cast.

Veteran actor Naseeruddin Shah shared his thoughts about working with the prolific filmmaker saying, ” I’m happy and I would want to congratulate Neeraj (Pandey
) for even after the success he has achieved, he still continues to make the kind of films”.

The actor further added,”Our General @neerajpofficial is not only a keen observer but also backs his vision to the fullest… #Aiyaary in cinemas this Republic Day”

He also added, “It’s a pleasure and an honour to work with Neeraj Pandey.”

Noted actor Adil Hussain while talking about Neeraj Pandey’s film said, ” The film I think is a very important film because we shy away from talking about the state of so many issues in India.”

Naseeruddin Shah further added, “If you in any capacity can be a part of a film that you believe in, that is about an issue that you feel is important to be told I think that gives me the most happiness.

Actress Pooja Chopra too took to Twitter to express her thoughts on the filmmaker saying, “The experience of working with @neerajpofficial sir on #Aiyaary was one I’ll never forget! #Aiyaary in cinemas on 26.01.18 @RelianceEnt”.

Another member of the film’s team said, “Neeraj sir’s good quality is that people who work with him become his friends.”

With films like ‘Special 26’, ‘Baby’, ‘Rustom’ amongst others Neeraj Pandey has paid tribute to the uniform officials of the nation that serve its public. ‘Aiyaary’ will yet again be an ode to army officials.

Aiyaary revolves around two strong-minded army officers having completely different views, yet right in their own ways. The film portrays Sidharth Malhotra as an army officer sharing a mentor-protégé bond with Manoj Bajpayee.

The trailer of ‘Aiyaary’ has got everyone hooked and is adding to the excitement to the film. Neeraj Pandey who can be regarded as a pioneer of espionage thriller is set to present Aiyaary which will prove to be treat this Republic day.