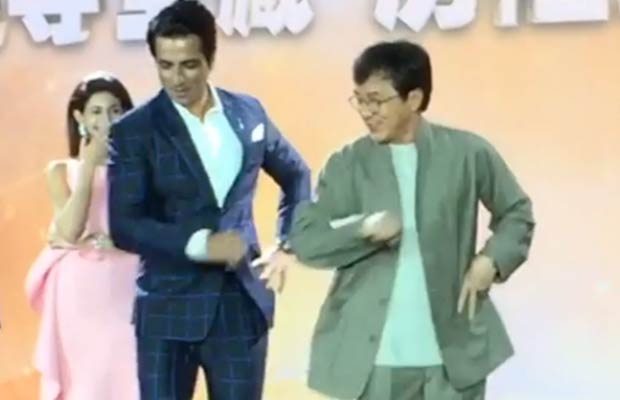 [tps_footer]Bollywood actor Sonu Sood and megastar Jackie Chan amazed everyone with their an impromptu dance performance at the 19th Shanghai International Film Festival that took place recently. Sonu Sood, who recently finished the shoot of his upcoming film ‘Kung fu yoga’ with Jackie Chan, promoted the film with his entire cast at the film festival in Shanghai. From walking the red carpet together to dancing on the stage, both Sonu Sood and Jackie Chan left fans stunned.

Sonu Sood shared a video of him dancing with Jackie Chan to the Punjabi song Tunak Tunak Tun of Daler Mehndi. One can see in the video, the energetic impromptu act of the two stars and must say, Jackie Chan has danced better than Sonu Sood to the tunes of Punjabi song. Don’t you think?

Talking about their upcoming film, ‘Kung fu Yoga’ is a part of a three-film agreement signed between India and China. Also, not many know that recently ace choreographer Farah Khan had choreographed Jackie Chan for Bollywood style-Chinese song in Jodhpur. The song will see Disha Patani, Amyra, Sonu Sood and Jackie Chan dancing together to the catchy beats. Apart from Sonu Sood, the film also stars actress Amyra Dastur and is slated to release this year in October.

With the most humble man I know @eyeofjackiechan #redcarpet #siff2016