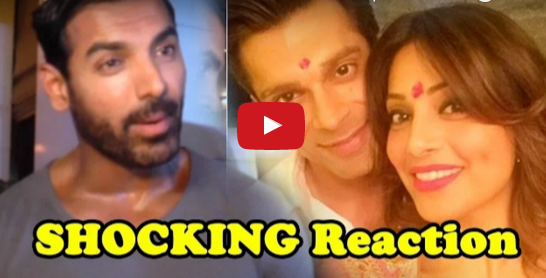 [tps_footer]As we all know Bollywood’s sensual actress Bipasha Basu is all set to tie the knot with Karan Singh Grover in next two weeks. Bipasha and Karan, who have been dating each other for a couple of years, have planned to take their relationship to the next level now.

Also, it’s not surprising that Bipasha had many relationships earlier before she started dating Karan Singh Grover. One of her longest 9-year-old relationships was with actor John Abraham and the real reason for their breakup is still a mystery. Well, they don’t even talk to each other now and in fact, at one occasion Bipasha had also said that she does not know who John Abraham is.

Well, John had moved on a long back and is now happily married to Priya Runchal but the questions on his ex still haunt him. Recently, a reporter tried to catch the reaction of John on Bipasha Basu‘s marriage. However, John managed to ignore the question, but in an unmannerly way. The actor instantly pushed a reporter’s mike away when asked about Bipasha’s marriage, which clearly showed that it irked him. Well, the sour relationship between Bipasha and John will continue forever?

John was at the event to inaugurate Abhinay Deo‘s wife’s book titled ‘Kharwar to Kolhapur via Mumbai’. The actor was last seen in his recently released film Rocky Handsome, which was an average film at the Box office. John has now geared up with the promotions of his next upcoming film Dishoom, which stars Varun Dhawan and Jacqueline Fernandez. [/tps_footer]