The self-proclaimed critic Kamaal R Khan is back with his bitter words. And this time his target is Shah Rukh Khan and Anushka Sharma starrer ‘Jab Harry Met Sejal.’ He has reviewed the film even before watching it and we are not surprised as the man has been doing it since forever.
Tweeting his review, KRK says, “This is the complete story n my review of film #JabHarryMetSejal! Watch and RT for others pls.”

In his review, KRK has narrated a story claiming that it is the plot of the film. He claims that the story is genuine as he has got to know about it from an insider. He tweets saying, “Today I will review #JabHarryMetSejal’s mini teasers n reveal complete story of the film. I got this story from a staff of @RedChilliesEnt!.”

This is the complete story n my review of film #JabHarryMetSejal! Watch and RT for others pls. https://t.co/gUOxi95IiG

In a series of tweets, the so-called critic has talked about how SRK has grown old and he doesn’t fit into the role of ‘Harry’ in the film. He has called the dialogues dirty and has even said that the film is not meant for family and hence it will be a flop. 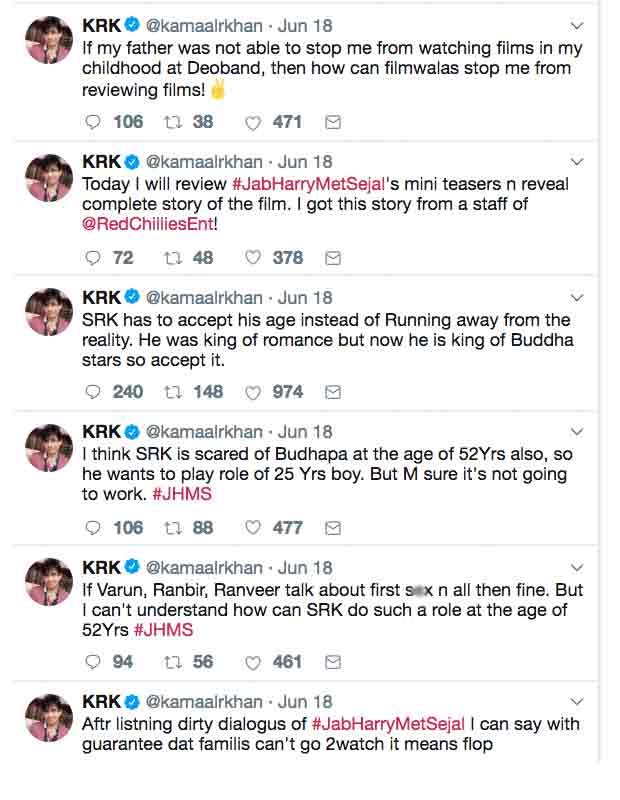 It is not the first time that Kamaal R Khan has done something like this. Earlier also, he had tried to reveal the story of Ajay Devgn’s ‘Shivaay.’

Well, how authentic his story is, can be known only after the film releases! But before that, it is going to be interesting to see if the makers or the cast of ‘Jab Harry Met Sejal’ reacts on this.

The film is slated to release on August 4, this year.