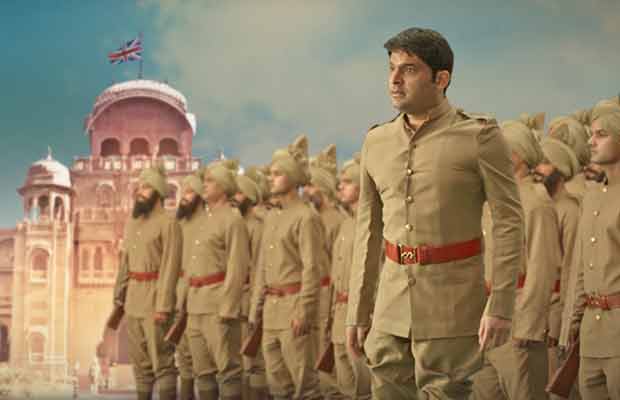 Kapil Sharma’s next film Firangi’s first motion poster is out!

For those who are missing the comedy king Kapil Sharma, here is the first motion poster of his next Bollywood film, Firangi. Kapil, although missing from the small screen, is very soon going to be seen on the silver screen in a full-fledged movie.

The first motion poster of Firangi is out and it looks as quirky as Kapil himself. In the motion poster, the comedian-actor can be seen kicking off a firangi in style. The peppy music in the background tells us that we can expect a lot of humour from the film. And why shouldn’t we? After all it stars Kapil Sharma.

It is the comedian’s second Bollywood film. Earlier he had made his debut in acting with the film Kis Kisko Pyaar Karoon. The film was a romantic comedy in which the actor was trying to balance his life while juggling between his three wives.

On a related note, Kapil Sharma’s TV show, The Kapil Sharma Show has been pulled off-air. Its last episode was aired on August 20, this year. The reason given by the channel for pulling down the show was the comedian’s poor health.

All of us know how several shoots of the show had to be canceled because of Kapil’s bad health. Celebs, who came on the sets for promoting their film, had to wait for a long time only to know at the end that the shoot could not happen.

Nevertheless, the makers have said that it is just a break for the show. And it will return soon on the small screen. But no date has been specified as yet.

Coming back to Kapil Sharma’s Firangi, the film will hit the theatres on November 24, this year!