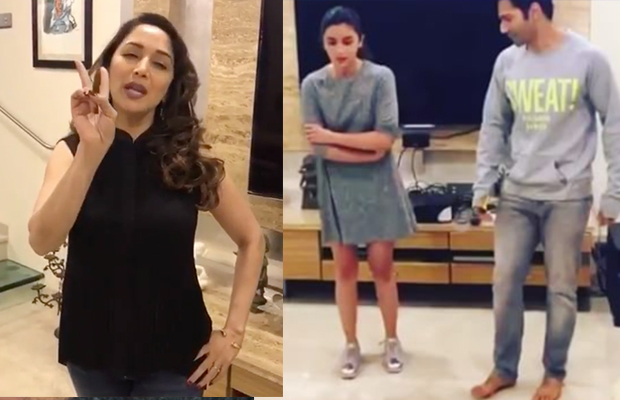 Bollywood’s adorable and favorite onscreen couple, Varun Dhawan and Alia Bhatt are back again for their upcoming film ‘Badrinath Ki Dulhania‘, a sequel to their 2014 rom-com ‘Humpty Sharma Ki Dulhania’. The much-awaited trailer and the first song of the film were recently released, creating much curiosity among the audience. Now the makers of the film are all set to surprise their audience with another amazing track, ‘Tamma Tamma’ from the 1990 film Thanedaar that starred Madhuri Dixit and Sanjay Dutt in the lead roles.

Varun and Alia are all set to step into the shoes of Sanjay Dutt and Madhuri Dixit. Surely, it’s not going to be a piece of cake for the two young and talented stars. But why worry when the dancing queen herself comes into action to guide Varun and Alia.  Varun Dhawan shared a video of him on social media that sees the Dhak-Dhak girl of Bollywood teaching the signature step of ‘Tamma-Tamma’ to the young actors.

In the video, Varun and Alia are seen trying to match Madhuri’s energy. The actress also tells “With me, she can never wrong.” Isn’t that so cute?

@aliaabhatt and badri learning then#tammatammaagain steps from @madhuridixitnene herself. Take a look at our dance class and see what madhuri thinks of alias moves ?

Directed by Shashank Khaitan, ‘Badrinath Ki Dulhania’ is produced by Karan Johar and is releasing on March 10, 2017.