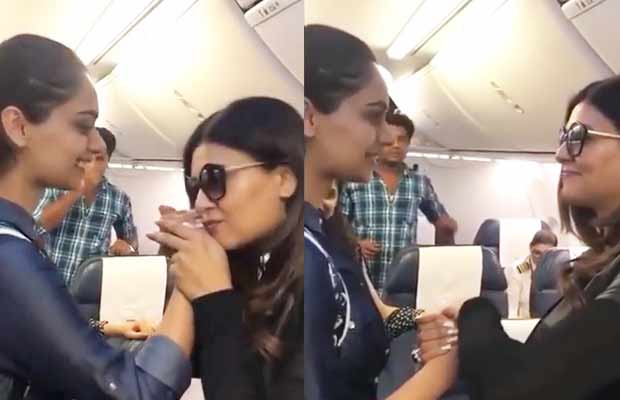 Manushi Chhillar and Sushmita Sen bumped aboard a flight— read to find out what happened next!

The new Miss World Manushi Chhillar is basking in the glory of her recent victory. The 20-year-old girl from Haryana won hearts with her honesty and of course her smile. Similarly, Sushmita Sen too, made hearts race with her dazzling smile and witty answers. So what happens when the beauty queens meet midair?

The video of the two beautiful women meeting has gone viral! In the old video, we see Manushi and Sushmita bumping into each other when aboard a flight. The video was shot back when Manushi was just Miss India preparing for the Miss World pageant.

In the video, we can see the sheer adoration that the two had for each other. We can see how stunned Sushmita is when she learns Manushi’s age and her achievements. Thereafter, Sushmita wishes Manushi all the best. ”Give it your best shot and then leave the rest in God’s hands. All the best!”

The former Miss Universe of 1994 also kissed Manushi’s hand. Perhaps that was all the luck that Manushi needed to become the Miss World— a kiss of good luck!

As for now, Manushi Chhillar has no plans to follow the star-studded path that Sushmita Sen is on. Manushi plans to concentrate on her MMBS studies for the meanwhile. After that, she plans to travel the globe for a social cause. Although, a movie opposite Aamir Khan might tempt her! Nudge, nudge Aamir… What are you waiting for?