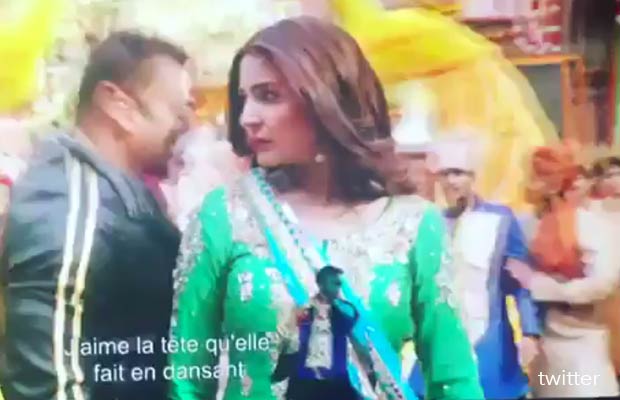 [tps_footer]Ranveer Singh is undoubtedly the most spontaneous actor of the tinsel town. The actor who is rising to the super star league is also a fan! Ranveer who is in Paris lately is enjoying every bit of his visit to the iconic city. The Peshwa of the industry was spotted at the screening of the film ‘Sultan’ in Paris.

Ranveer graced the screening of the Salman Khan starrer film in Paris at the Champs Elysees area. Just when everyone was engrossed in the film Ranveer stepped up on the dais and flaunted his fan instinct. The actor was so impressed with ‘Sultan’ that he gave an impromptu performance in between the film. He not only danced candidly but he also cheered for superstar Salman Khan.

The fans were shocked and surprised by this stint. Ranveer Singh surely made everyone smile with his undecided presence. A fan club on the micro blogging site Twitter posted a video which sees Ranveer dancing during the screening of ‘Sultan’.

[VIDEO] Our baby has got all the moves! ??#RanveerWatchesSultanpic.twitter.com/ajiT1BOZdN

The onlookers present there could not control their excitement either. Must say the Bajirao Mastani actor surely knows how to be his real self. ‘Sultan’ starring Salman Khan and Anushka Sharma in lead roles is making heaps of collections at the box office. The film is directed by Ali Abbas Zafar and is crowned as the first blockbuster of the year already. In the five-day run at the box office, ‘Sultan’ has already managed to cross the 150 crore mark.

Coming to actor Ranveer Singh, the actor will soon be seen in a romantic avatar in the film ‘Befikre’. The film stars Vaani Kapoor opposite Ranveer. ‘Befikre’ helmed by Aditya Chopra will release on December 09, 2016.
[/tps_footer]