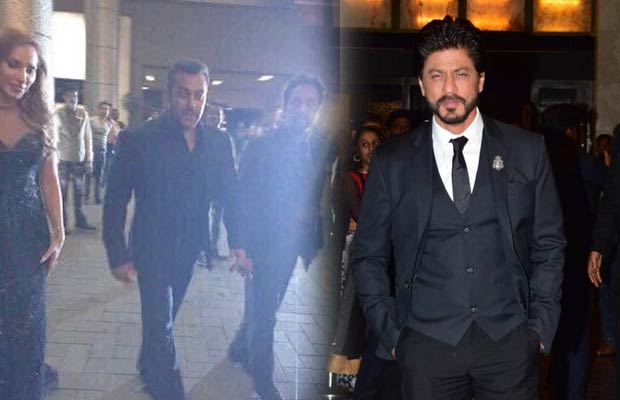 [tps_footer]We all know Romanian beauty Iulia Vantur has secretly been a part of Salman Khan‘s life for a very long time. All the eyes were on Salman Khan yesterday, who was attending Preity Zinta’s wedding reception as the actor chose to make his relationship with Iulia Vantur official there. Salman arrived alone in his car while rumoured girlfriend Iulia arrived in another car with Alvira and Atul Agnihotri.

The Being Human star stepped out first from his car and bumped into Yuvraj Singh. The two were seen talking to each other and in the mean time, Iulia arrived with Salman Khan’s family. The actor then introduced Iulia to Yuvraj Singh before entering the venue.

According to our source, Salman and Iulia were having a good time at Preity Zinta and Gene Goodenough’s wedding reception. Not only that, the Bajrangi Bhaijaan star also introduced Iulia to Shah Rukh Khan and Abhishek Bachchan, who were also present at the reception party. The actor was seen catching up with all his friends at the party and stayed back till late while Iulia secretly managed to exit from the party with Salman Khan’s family.

Well, now that the two are making public appearances, we are sure THE day is not far when Salman will make an official announcement. Salman might finally be tying the knot in 2016!