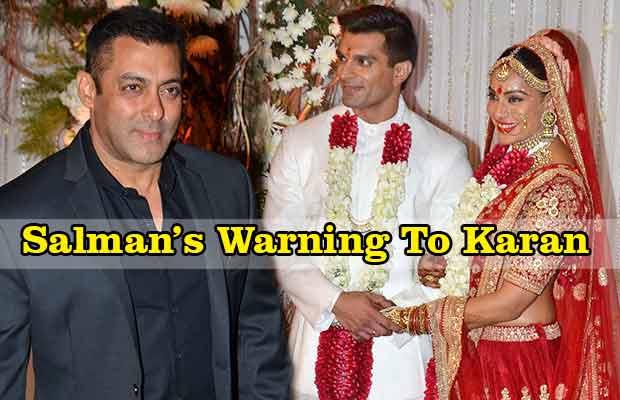 [tps_footer]It’s Dabangg Salman Khan we are talking about who can be a sweetheart and also a very blunt advisor. Salman has been friends with Bipasha Basu for more than a decade and they have maintained a good friendship right from Bipasha’s modeling days. But, unfortunately, Salman and Bipasha’s ex-flame John Abraham had some ego clashes in the past which always kept Bipasha at a distance from Salman Khan. That’s passed !

Currently, John Abraham is happy and all set in his personal life after getting married to Priya Runchal and Bipasha Basu moved on with her Alone co-star Karan Singh Grover and yesterday they tied the knot for a happy successful marriage. We hope this will work out and both, Bips-Karan get a relationship to cherish for the rest of their lives. This big fat Bengali wedding was very well received and stars like

While interacting with media all the stars gave their best wishes and honestly, they all were so happy for Bips-Karan. But, Karan’s past will never leave him and he will always be reminded by his two unsuccessful marriages. KSG has even earned a lot of negativity and criticism for taking relationships casually and for being on a spree to get married again and again. Now, he has fallen for Bengali beauty Bipasha Basu and Salman Khan being a true friend expressed his views on this marriage and he said, “I hope this marriage of Karan and Bipasha will last and it’s important.”

Although Bajrangi Bhaijaan Salman is known to be a lover boy and he never stayed in a stable relationship. Sallu has a list of beautiful girlfriends and we spot them at various occasions held at Salman’s place. But, he does understand the importance of marriage and that’s why he became the peacemaker for Arbaaz-Malaika and Sohail-Seema split. And, now he wishes the best for Bips-Karan wedding but the million dollar question is Salman aap kab ghodi chadogay ? When will we get to see that day when media will cover Salman Khan’s wedding ?