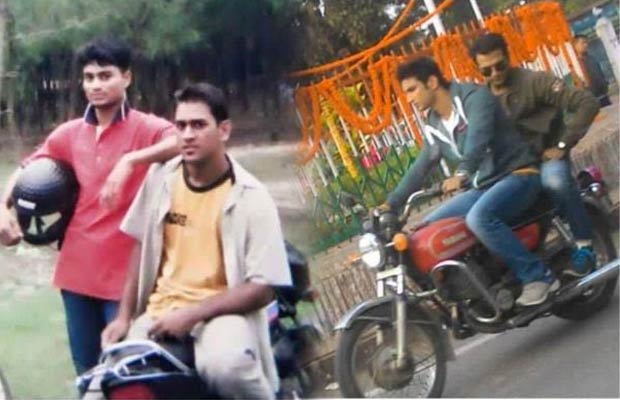 [tps_footer]This pic of M. S. Dhoni and Sushant Singh Rajput on bike from their days of youth, surely spin a web in your mind.

Recently, this picture of our cricket skipper and Sushant on bike, surfaced on the social media. The striking resemblance between Sushant and Dhoni stunned all.

The reactions were similar when first look of Sushant‘s upcoming film, M.S Dhoni-The Untold Story was out.

This surely points out that, casting Sushant Singh Rajput for the most anticipated biopic ever was the right choice.

Sushant has gone to extreme lengths to prepare for this role, be it hours of cricket practice or be it just watching Dhoni play, Sushant has done it all.

Since the teaser of M.S Dhoni – The Untold Story has released, it has managed to leave the people intrigued and curious to know more about the film.

Everyone, right from the audiences to critics to people from the industry have been raving about the teaser.

M.S Dhoni – The Untold Story features Sushant Singh Rajput in the titular role alongside Kiara Advani who will be playing the part of Sakshi Dhoni in the film.

Helmed by ace director Neeraj Pandey, produced by Arun Pandey and Fox Star studios, the film which is one of the most anticipated films of the year is all set to release on September 2nd, 2016.[/tps_footer]