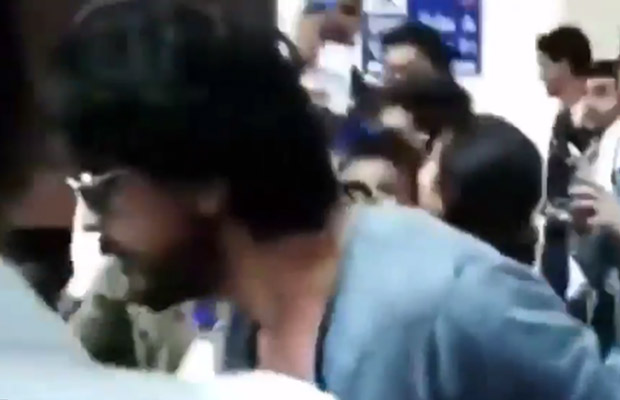 Yes, SRK who is vey much attached with his little son AbRam, was spotted with the tiny tot at the Bhuj airport. We got our hands on the video of SRK leaving with AbRam from the airport. One can see in the video, to play safe from the cameras and crowd, two ladies rushing towards the car with AbRam on tow while SRK rushes later from behind.

As soon as Shah Rukh Khan was making his way towards his car, hundreds of people were seen cheering and taking pictures of the actor. Before getting into his car, SRK also waved to his fans for few seconds.

Hundreds of people were waiting to catch the glimpse of their favourite actor and during the same time, a lady fell down at the airport. Despite of massive crowd following him and without ignoring it, SRK helped the lady to get up.

Also, take a look on the recent pictures of Shah Rukh Khan with his Raees co-star and actress Mahira Khan on the sets of the film. Also spotted in the group picture with Mahira Khan are Govinda and Pakistani singer Ali Zafar.

Talking about the film, directed by Rahul Dholakia, the film has an interesting story which tells the story of a bootlegger, whose business is thwarted by a policeman. The movie also stars Nawazuddin Siddiqui, Pakistani actress Mahira Khan in the lead role. The film is schedule to release this year on Eid.

SRK Pulled Up a Lady Woh Fell Down at Bhuj Airport #Raees pic.twitter.com/tfRGOibLCx