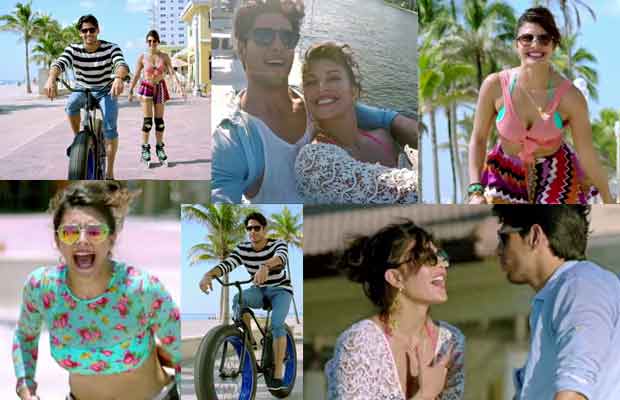 The second song from ‘A Gentleman- Sundar Susheel Risky’ has released and it will make you want to pack your bag and hit the beaches.

‘Baat Ban Jaye’ is a fun, groovy number with a light and breezy tone. Sung by Siddharth Basrur and Priya Sariya the song makes for a perfect beach anthem.

Set against a breezy backdrop ‘Baat ban jaye’ is shot on some of the most exotic locations of Miami.

Featuring the Sundar and Susheel Sidharth Malhotra as Gaurav and the gorgeous Jacqueline Fernandez as Kavya, the song exhibits the playful chemistry between the duo.

The quirky lyrics of the song are a complete treat for the millennials.

Jacqueline Fernandez is seen showcasing her killer moves on the funky beats of the song and its difficult to take eyes off her when she moves.

Both Sidharth and Jacqueline leave you captivated with their breezy romance.

Jacqueline Fernandez looks ravishing with her perfect beach body and Sidharth Malhotra is seen showcasing his stunning svelte built. The actors undoubtedly make one of the most good looking couples in Bollywood.

‘A Gentleman’ Sundar Susheel Risky is an action comedy which revolves around the mistaken identity of the Sundar and Susheel Gaurav and the risky Rishi played by Sidharth Malhotra. Jacqueline Fernandez portrays the role of his love interest Kavya.

The trailer of the song has got everyone hooked to the film. The song ‘Disco Disco’ has also turned out to be a popular chart buster. ‘Baat Ban Jaye’ is only bound to increase the anticipation for the film.