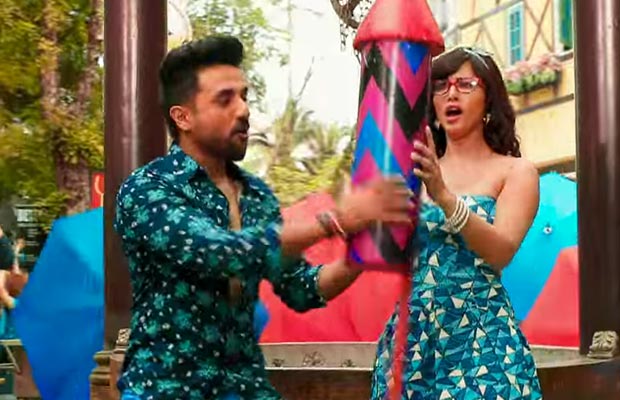 [tps_footer]Recently, official trailer of Mastizaade, starring Sunny Leone, Tusshar Kapoor and Vir Das in the lead roles had released and now the makers of the film have released the first song ‘Rom rom romantic’ from the film.

Sunny Leone is known to set the temperatures high in her films and the sizzling actress is once again nailing with her hot avatar in the new song from her upcoming film Mastizaade. Wearing bikini, the hot and sizzling actress is scorching the beaches in the song. Sung by Mika Singh, the foot tapping romantic song with amazing beats is perfect for a party. Sunny Leone’s car-washing stint in bikini is the highlight of the song.

The hot actress Sunny Leone will be seen playing double role – Laila and Lily in the adult comedy. The two will be seen as twin bombs in the film.  On the other hand, actors Tusshar Kapoor and Vir Das will play the role of two s**-addicts.

While Sunny appears in her all time hot sizzling avatar, Tusshar Kapoor and Vir Das will make you laugh out loud with double meaning and dirty jokes. Well, its Sunny Leone film, more than dialogue, the film has focused more on flashing skin and that’s how it works. In one of scenes from the film, Sunny Leone also goes all out.

Mastizaade has a double meaning punch line, which gets repeated again and again, “Sikka hilla toh pass”. Directed by Milap Zaveri, the movie “Mastizaade” is slated to release on January 29.
[/tps_footer]