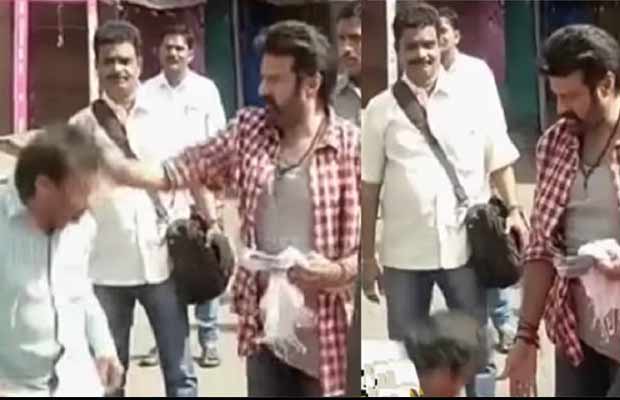 The Telugu actor Nandamuri Balakrishna manhandled his assistant slapping him on the sets of his film.

The Telugu actor Nandamuri Balakrishna is infamous for his rude behaviour that he very often shows with some or the other person. It was earlier in this year only when the actor had snapped back at a fan who was trying to click a selfie with him. This happened at the screening of his film ‘Gautamiputra Satakarni’.

He is currently working on his upcoming project with director KS Ravikumar. The film’s shooting kick-started on this Thursday itself and it has started on a very bad note.

On the very first day of the shooting, a controversy has arisen because of Balakrishna. A video from the sets of the film has gone viral in which the actor can be seen manhandling his assistant. In the video, we can see that when the assistant comes near Balakrishna, he slaps him and asks him to remove his footwear.

Last year also he had sparked a controversy by giving a very shameful statement. In an event, talking about his films he had said, “I have always tried to do different roles. If I simply run behind the actresses, my fans will be disappointed. They like it when I either kiss the girl or make her pregnant.” He had even said that he also “playfully pinches the female actors he works with.”

Talking about the work front of the actor, he is currently working on his 102nd film. The film is yet to be titled but the shooting has been commenced in the Ramoji film city of Hyderabad. It is a Ravikumar directorial and going to be produced by C Kalyan. The film also stars Nayanthara, Prakash Raj and Jagapathi Babu.