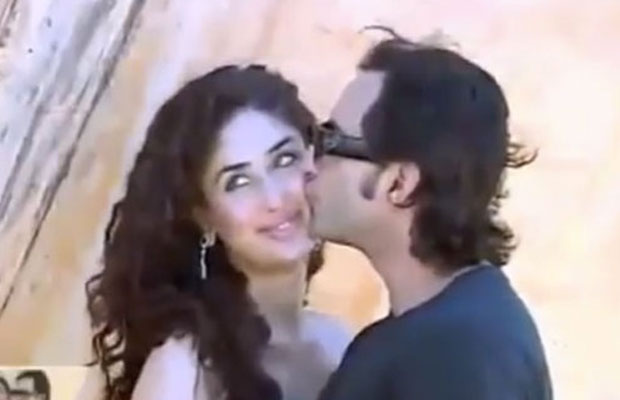 Bollywood’s charming couple Saif Ali Khan and Kareena Kapoor are still in love like a newly married couple. The adorable duo can be seen making public appearances together, and have a loyal fan following for their jodi better known as ‘Saifeena’. Well we’re sure all you fans must not have seen this adorable video of the two love birds, where they just cannot keep hands off of each other! Saif can be seen holding Kareena close in his arms and planting a kiss on her cheek.

The short video was apparently shot in 2012 during some video shoot. As we can see from the video, Saif is sporting a clean shave look, something we haven’t seen him in since quite a while. Kareena Kapoor is all smiles as her hubby holds her close in his arms while adorably kissing his cheek. While Kareena is busy smiling and looking into the camera, Saif can’t seem to take his eyes off from his dotting wife.

Recently the duo was also spotted going for a family dinner at the Kapoor residence. No matter how busy their schedule is, they make sure to take some time off to be together. Kareena and Saif’s marriage has certainly set standards as a couple for the industry. The duo has worked together in films like ‘Tashan’, ‘Agent Vinod’ and ‘Kurbaan’. We’re surely dying to see this real life couple on silver screen once again!

Kareena Kapoor who is on cloud nine after the massive success of her film ‘Bajrangi Bhaijaan’ with Salman Khan is currently working on her upcoming project ‘Ki and Ka’ starring Arjun Kapoor. While after working together with Katrina Kaif in ‘Phantom’, Saif Ali Khan is gearing up for the film ‘Rangoon’ starring Shahid Kapoor and Kangana Ranaut. And interestingly director Vishal Bhardwaj has also stated that he wish could bring Kareena onboard for the film in some way. Will we really be lucky enough to see Saif, Kareena Kapoor and Shahid together?