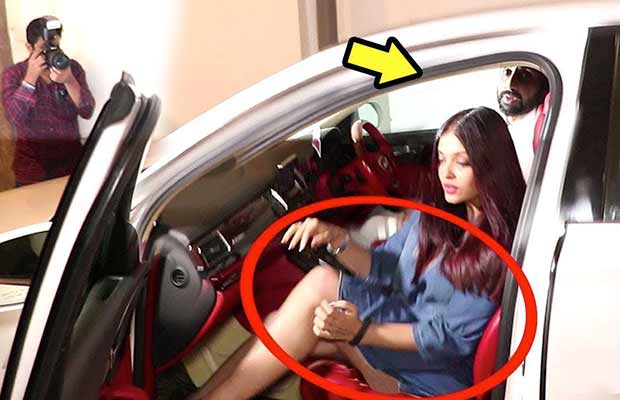 Abhishek Bachchan lashes out on paparazzi as he photographs Aishwarya Rai Bachchan’s legs.

While attending a party Aishwarya Rai Bachchan was dressed in a cute denim dress and hubby Abhishek Bachchan wore a sweatshirt and track pants. Seeing the actress in a dress, one of the photographers tried to capture Aishwarya’s legs while getting in the car with Abhishek.

The ever vigilant Abhishek exclaimed that he knew what they were photographing. He went further and called one of the photographers and asked him to show the pictures that he had clicked but left the photographer with a stern warning.

The couple was attending a party at Aishwarya’s Fanney Khan costume designer— Manish Malhotra’s house. Earlier today Manish Malhotra posted an inside party photo with his guests Aishwarya Rai Bachchan, Abhishek Bachchan and Karan Johar on instagram. The photographer incident happened whilst the couple was getting in the car driven by Abhishek.

The reports of the Fanney Khan actress throwing a tantrum and being upset with her designer friend Manish Malhotra due to the costumes not being apt for her role were widely circulated. However, Manish’s photograph proves that all is well between Aishwarya and the designer.