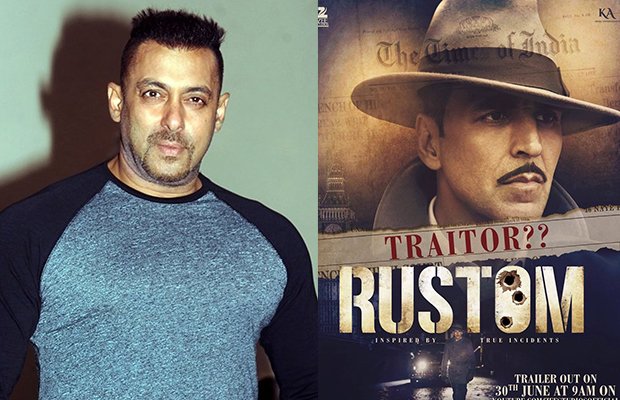 [tps_footer]Salman Khan is one superstar who takes decisions with his heart. The amazing actor is on cloud nine for the success of his recently released film ‘Sultan’. The movie has broken all the records of the year and is also tagged as the blockbuster. After the Salman Khan and Anushka Sharma starrer film, the masses are eagerly waiting for Akshay Kumar’s ‘Rustom’.

The Khiladi of the tinsel town who is successfully experimenting with his serious characters will now flaunt his intense side in ‘Rustom’. The trailer of the film is mystery filled and is engaging to the core. The tracks of the film are also loved by the masses. Not only is Akshay promoting his upcoming film to the fullest even Salman wants his fans to watch the thrilling flick.

The Airlift actor posted the glimpse of the video on the photo sharing app Instagram saying, “So guys Sultan @beingsalmankhan has spoken, are you listening? #10DaysToRustom.”

Seems like, Salman and Akshay are far away from being competitors! On the film front, Salman Khan will soon start shooting for Kabir Khan’s ‘Tubelight’.

Coming to ‘Rustom’ the film stars Akshay Kumar, Ileana D’Cruz and Esha Gupta in lead roles. The movie is based on the Nanavati case. ‘Rustom’ will hit the screens on August 12th, 2016.[/tps_footer]