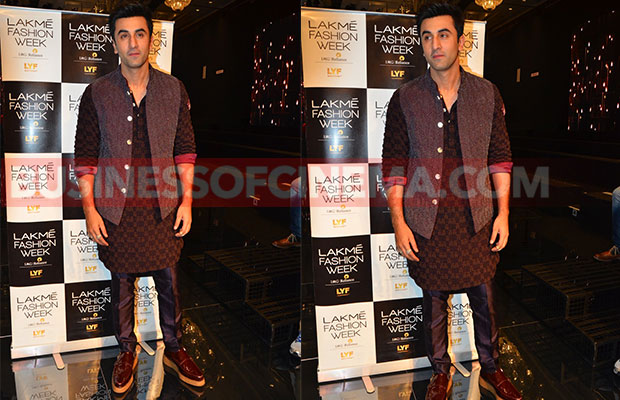 [tps_footer]Bollywood actor Ranbir Kapoor recently walked the ramp for his designer friend Kunal Rawal at the Lakme Fashion Week 2016. The dashing actor looked amazing in Kunal Rawal designer traditional attire. The “Yeh Jaawani Hai Deewani” grabbed all the eyeballs when he walked the ramp in a unique style. Post event, Ranbir also interacted with the media.

During media interaction, a reporter complimented Ranbir Kapoor saying that he looks like a perfect groom (Dulha) in the traditional attire. The handsome hunk was quick enough to react and sarcastically said, “Are you married? If you are ready, I will marry you.”

Not leaving the chance of the moment, another reporter asked Ranbir Kapoor about the rumours on his marriage. Before the reporter could complete the question, Ranbir smartly cut off saying “thank you.”

Well, while he was asked about the marriage rumours, Ranbir was surely blushing and we just can’t get enough of his cuteness. You should definitely watch the video below to know his reaction on the same!

On a related note, rumours are doing rounds that Ranbir Kapoor’s parents Rishi and Neetu Kapoor are in a search of a perfect bride for their son. With the help of Ranbir’s sister, recently parents Rishi Kapoor and Neetu were searching for the best match for their son’s marriage, who is from Delhi and not Mumbai.

Well, since actor’s breakup with Katrina Kaif, his personal life has been in the limelight.