The recently released movie PINK has been getting accolades not only from the film critics but even the audience has given thumbs up to the film. Amitabh Bachchan-Taapse Pannu starrer Pink has completed its two-week run at the box office and it has minted over 50 crores at the Indian Box office. The movie being very powerful in content conveys a great message.

This movie very well depicts the harassment faced by the women in the Indian society. All the women have appreciated this Shoojit Sircar’s movie and definitely the movie explains one thing very clearly, “a no means NO.” This movie has surely won the hearts of the people in the country and there is one such woman who wrote a letter to Taapsee Pannu who has played an integral role in the movie. A twitter user named Shristhi Mitra, wrote a letter to the actress and congratulated her for the movie’s success and also thanked her for starting the movement.

Here is the letter a fan posted on Twitter: 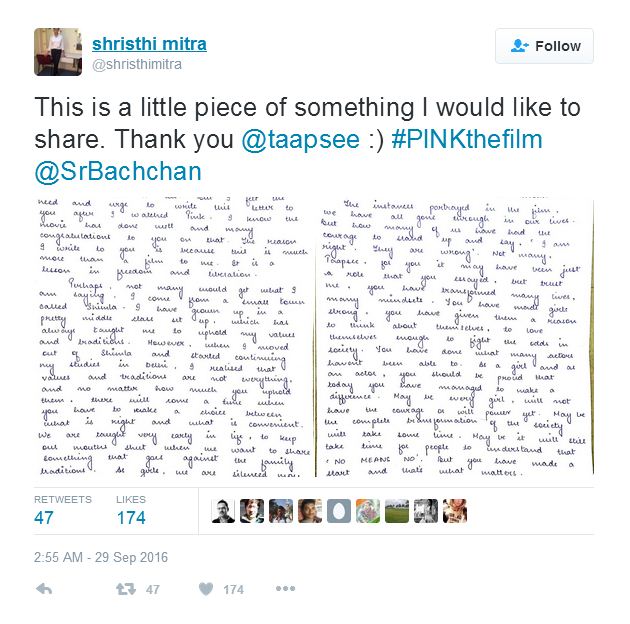 Taapse took to twitter and thanked her fan. The letter put the actress in tears. Here is what Taapsee tweeted: 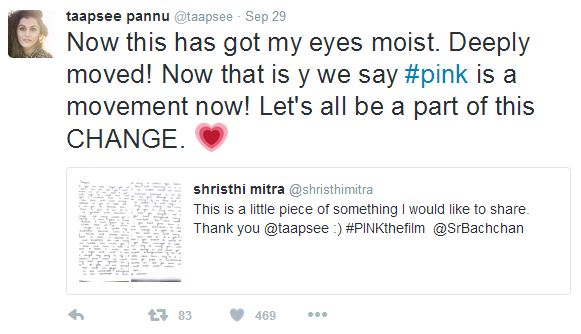 After the success and the incredible response from the audiences director Shoojit Sircar has decided to remake the movie, “PINK” in Telugu for which actress Taapsee Pannu will be helping as the lead for the project since she has a good fan following in the South and also has a great recall value. Another reason of the remake of the film is its message which is universal in nature and which educates the audiences to have a voice of their own and not shove it under the carpet. Apart from this the director also feels that no one can do justice to the role like Taapsee did and portray such intense feelings on screen.

It will be a great delight to see Taapsee yet again win our hearts just like she did now.