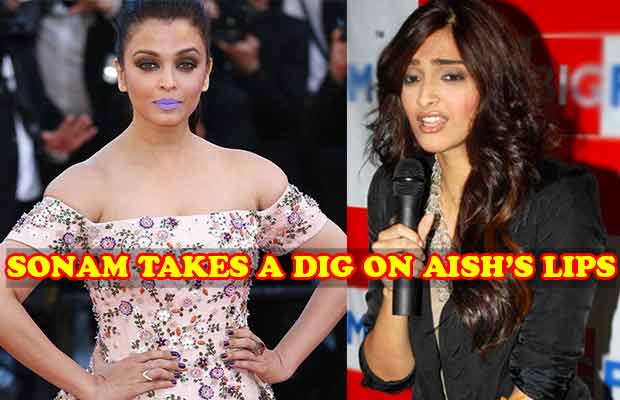 [tps_footer]Aishwarya Rai Bachchan’s purple lips was definitely a highlight moment at Cannes festival. Everyone in the industry spoke about it. Aishwarya was trolled on social media on her purple lips and if thats not all she had an Amul Ad on her too. Well we really liked her purple lips and it was really sporting on her part to dawn that shade and to carry it out with such grace and confidence.

But there is one actress who had a different take on Aishwarya’s purple lips. Yes and that actress is Sonam Kapoor. Sonam Kapoor is known for her care free attitude and her bindas demeanour. In past Sonam had commented that, “Aishwarya has worked with my dad, so obviously I will call her aunty na”. And this comment really dint go down well with Aishwarya. But this time here is what Sonam has to on Aishwarya’s purple lips:

“The whole idea of fashion and make-up is for people to discuss it and I guess she wanted to be discussed. She achieved what she wanted to achieve with it, which I think is great. I don’t think she walked for L’Oreal that day. There was an Amul ad on it, people were discussing it. I think it was great to do it on a 15th year, it’s cool. She was trending everywhere. I have done purple lipstick in the past, I have even done black for a shoot… People haven’t spoken about me!”

Well we really liked Aishwarya’s new experiment, did you? Tell us in the comments below.[/tps_footer]