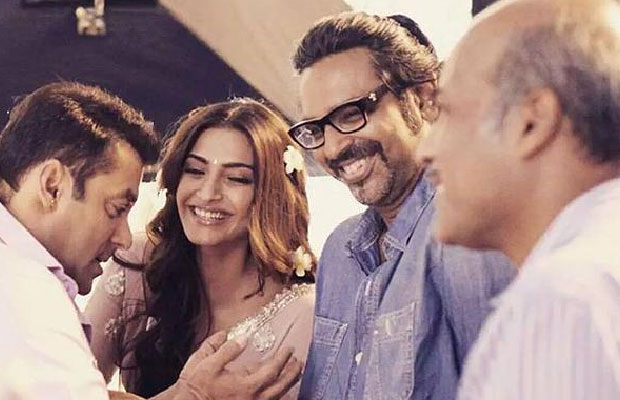 As we all know, Bollywood’s handsome hunk Salman Khan is quite strong, but little did any one know that he is equally very emotional. Salman Khan, who can hide his emotions publicly, couldn’t control his feelings and emotions on the sets of ‘Prem Ratan Dhan Payo’.

Recently, during the shooting of ‘Prem Ratan Dhan Payo’, ‘Bajrangi Bhaijaan’ actor who is soft hearted easily moved into tears. Salman who couldn’t hold back broke down into tears when the actor had to deliver touching dialogues to Sonam Kapoor during the shooting. The ‘Being Human’ star who gets into the skin of his character, reportedly went teary eyed instantly while performing those dialogues. Reportedly, not only Salman but also the entire cast and crew went emotional for the same.

Now we wonder, how badly this film can make us cry when it made Salman and other crew members teary eyed. Earlier, Salman Khan in an interview had already revealed that this film is going to be emotional more than Bajrangi Bhaijaan.

Director Sooraj Barjatya who has teamed up with Salman Khan after a decade said, Salman is the quintessential Prem, and once again audiences have loved and treasured in their hearts. The film is releasing during festival of lights and will tug at the heartstrings of audiences with the Indian-ness love and values it has in its core.

Directed by Sooraj Barjatya, the film stars Salman Khan and Sonam Kapoor in the lead roles. Not only that, Dabangg Khan will play double role in the film. The film also features actor Neil Nitin Mukesh and will hit theatres on November 12, 2015.